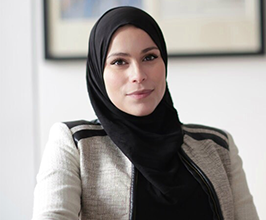 Book Alaa Murabit for your event

Alaa Murabit is a medical doctor, Canadian Meritorious Service Cross recipient, one of 17 Global Sustainable Development Goal Advocates appointed by the UN Secretary General, and a UN High-Level Commissioner on Health Employment & Economic Growth. In 2016, she founded a global Mentorship Programme for emerging leaders and co-founded The Omnis Institute, an independent non-profit organization committed to challenging critical global issues through the empowerment of emerging local leaders, and became the Executive Director of Phase Minus 1, which provides thought leadership in conflict resolution and inclusive security. Murabit previously founded and spearheaded The Voice of Libyan Women at the age of 21.Her efficacy in security, health policy, and sustainable development was recognized in 2018 by Women of Influence, as she was named one of Canada’s Top 25 Most Influential Women. She also received the 2018 Nelson Mandela International Changemaker Award by The Nelson Mandela Family and PTTOW and the BlogHer 2018 Voice of the Year Award by Sheknows Media.In 2017, Murabit was named a Forbes 30 Under 30, Aspen Institute Spotlight Scholar, and Bay St. Bull Canada’s 30×30. Her leadership in global policy and in elevating the role of women, particularly young, minority women, on global platforms was recognized by Harvard Law who named her the youngest 2017 Woman Inspiring Change.Murabit completed high school in Saskatoon, Canada at the age of 15 and moved to Zawia, Libya where she enrolled in medical school and founded VLW at the age of 21. With a strong focus on challenging societal and cultural norms, Murabit champions women’s participation in peace processes and conflict mediation. Her programs, such as the groundbreaking “Noor Campaign” are replicated internationally. Her TED Talk, released in July 2015, “What my religion really says about women” was selected as the TED Talk of the Day and one of four moving TED Talks you should watch right now by The New York Times.Nicknamed “The Libyan Doogie Howser” by Jon Stewart and applauded for her innovative approach to security, she serves as an advisor to numerous international security boards, think tanks and organizations, including the UN Security Council Resolution 1325 (women, peace, and security), UN Women Global Advisory Board, and the Council on Foreign Relations. An Ashoka fellow, she is the youngest recipient of the Marisa Bellisario International Humanitarian Award by the Italian Government, was named the “International Trust Women Hero 2014” by The New York Times, “One of 25 women under 25 to watch” by Newsweek, a “100 Top Woman” by the BBC and the SAFE Global Hero.Murabit was nominated to address the UN General Assembly multiple times, including during the Commission on the Status of Women opening session, and was nominated to address the UN Security Council during the 15 year anniversary of Resolution 1325.Murabit completed her medical degree at the University of Zawia and went on to complete her Masters in International Strategy and Diplomacy with Distinction at the London School of Economics.Contact a speaker booking agent to check availability on Alaa Murabit and other top speakers and celebrities.