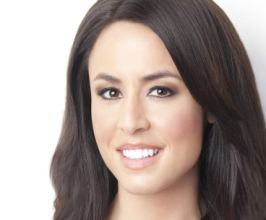 Book Andrea Tantaros for your event

Andreana Kostantina Tantaros is an American conservative political analyst and commentator. She was a co-host of “Outnumbered” on Fox News Channel, and an original co-host of “The Five.” She sued Fox News in August 2016, claiming sexual harassment, but case was dismissed in court in May 2018.Tantaros was born and raised in Allentown, Pennsylvania, where she attended Parkland High School. Her father is a Greek immigrant, and her mother is of Italian descent. Her family owned the Pied Piper Diner, where she worked. She graduated from Lehigh University with a degree in French and journalism, being fluent also in Greek and Spanish. As she was finishing her degree, Andrea worked as an intern for CNN’s “Crossfire” program, when she helped cover the Republican National Convention in Philadelphia. She completed her graduate studies at the Sorbonne in Paris, France, where she earned a master’s degree. After returning from Paris in 2003, Tantaros moved to Washington, D.C.Tantaros worked as a spokeswoman for Massachusetts Governor William Weld, then Congressman Pat Toomey and former National Republican Congressional Committee Chairman Thomas Reynolds. After moving to New York City in 2005, she started Andrea Tantaros Media, which provided crisis management and media strategy consulting to Fortune 500 companies and political campaigns. Tantaros joined Fox News Channel in April 2010 as a political contributor. In 2011, she was named a co-host of The Five. After several months of airing, The Five consistently beat its competitors on MSNBC and CNN combined and by 2013, it was the second-most watched program in cable news.Tantaros went on to co-host Outnumbered in 2014. After initiating formal complaints of sexual harassment against Fox News personnel, on April 25, 2016, she was pulled from the show for what Fox News said were “contract issues.” In August 2016, Tantaros filed a lawsuit claiming that she approached Fox News executives about Roger Ailes sexually harassing her in 2015. She said that her allegations resulted first in her being demoted from The Five to Outnumbered, and then in her being taken off the air in April 2016. The lawsuit also claimed that Bill O’Reilly, Dean Cain, and Scott Brown made inappropriate comments to her, and that Brown and Cain touched her without her consent. Her amended complaint, filed on January 29, 2018, contained details intended to back up her claims of a culture of harassment—including spying on employees—at the network. However, that complaint, too, was rejected. On May 18, 2018, Judge George B. Daniels threw her case out, citing lack of “factual support.” Tantaros, with no formal legal training, had decided to represent herself in the case after going through three lawyers.Contact a speaker booking agent to check availability on Andrea Tantaros and other top speakers and celebrities.