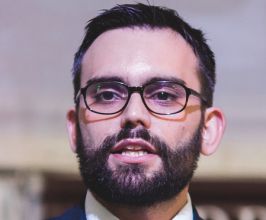 Book Andrew Aydin for your event

Andrew Aydin is creator and co-author of the graphic memoir series, March, which chronicles the life of Congressman and civil rights icon John Lewis. Co-authored with Rep. Lewis and illustrated by Nate Powell, March is the first comics work to ever win the National Book Award.An Atlanta native, Andrew was raised by a single mother, and grew up reading comic books. After college, he took a job with Congressman Lewis. In 2008, Congressman Lewis mentioned to Andrew the 1957 comic book Martin Luther King and the Montgomery Story and the role it played in the early days of the civil rights movement. Recognizing the potential for a comic on Congressman Lewis’ life to inspire young people, Andrew urged him to write a comic about his time in the movement, but Congressman Lewis had one condition: that Andrew write it with him. Collaborating with artist Nate Powell, the March trilogy was born in 2013.Today, Andrew serves as Digital Director & Policy Advisor to Congressman Lewis in Washington, D.C. A graduate of Trinity College in Hartford and Georgetown University in Washington, Andrew wrote his master’s thesis on the history and impact of Martin Luther King & The Montgomery Story. The best-selling graphic novels March: Book One, March: Book Two, and March: Book Three are taught in middle schools, high schools, and colleges across the country. Andrew often speaks at schools and universities, participates in reading programs with incarcerated youth, serves as a national project advisor to the National Endowment for the Humanities (NEH) for “The Great Stories Club (GSC): Reading and Discussion for At-Risk Youth”, has taught classes on script writing at the Smithsonian, and has appeared as a guest on the Rachel Maddow Show, Morning Joe, CBS This Morning, NPR, CNN, the BBC and many other outlets.Andrew’s other works include the 2016 X-Files Annual, the 2016 CBLDF Annual Liberty, and Bitch Planet: Triple Feature, as well as articles for the Atlanta alt-weekly Creative Loafing and the Southern Poverty Law Center’s Teaching Tolerance Magazine.Contact a speaker booking agent to check availability on Andrew Aydin and other top speakers and celebrities.