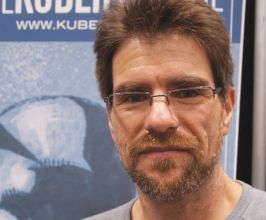 Book Andy Kubert for your event

Andrew “Andy” Kubert is an American comics artist, son of Joe Kubert, and brother of Adam Kubert, both of whom are also artists, and the uncle of comics editor Katie Kubert. He is a graduate of and an instructor of second-year classes at The Kubert School, founded by his father who also taught there.Andy Kubert started his comics career as a letterer at DC Comics in 1980. His first credited artwork for the company was the story “Old Soldiers Never Die” in Sgt. Rock #393 (Oct. 1984). He later drew Adam Strange and the Batman versus Predator intercompany crossover. He is best known for his work at Marvel Comics, specifically the company’s X-Men titles. An occasional cover artist on Uncanny X-Men (drawing the first cover appearance of the character Gambit) and X-Men Classic, Kubert later served as a fill-in penciller for Uncanny X-Men #279-280 and #288 before becoming the regular penciller on X-Men vol. 2 (starting with #14), following Jim Lee’s departure from Marvel to form Image Comics. Kubert was one of the artists of the “X-Cutioner’s Song” storyline which ran through the X-Men titles in 1992 and drew the wedding of Cyclops and Jean Grey in X-Men #30 (March 1994). Kubert drew the Amazing X-Men limited series as part of the “Age of Apocalypse” storyline in 1995. In 2001, Kubert drew two issues of the new Ultimate X-Men title. With writers Bill Jemas, Joe Quesada and Paul Jenkins, Kubert produced the Origin limited series which revealed the early history of Wolverine. Kubert collaborated with novelist Neil Gaiman on the Marvel 1602 eight-issue limited series published from November 2003 to June 2004. Writer Orson Scott Card and Kubert crafted the Ultimate Iron Man limited series in 2005.Both Kubert and his brother, Adam, signed exclusive contracts to work for DC Comics in 2005. Andy Kubert became the penciller of the Batman series and with writer Grant Morrison introduced the Damian Wayne character.He illustrated the covers to Batman: Cacophony, a three-issue miniseries published in November 2008. Kubert drew the two-issue Batman story by Neil Gaiman entitled, Whatever Happened to the Caped Crusader? This reunited Gaiman and Kubert, who previously worked together on the series Marvel 1602.While his brother Adam has returned to Marvel Comics following his three-year deal with DC, Dan DiDio confirmed in 2009 that following Whatever Happened to the Caped Crusader?, Kubert had two more Batman projects in the works, one of which he would write himself. He contributed covers to the Blackest Night: Batman mini-series, as well as variant covers for Blackest Night issues of Green Lantern.In late 2009, DC announced that Andy Kubert was working on two DC stories, one featuring Batman, the other featuring the DCU. Kubert’s father Joe inked over his pencils on the first two issues of DC Universe: Legacies, a 10 issue series chronicling the history of the DC Universe. Andy Kubert contributed to Batman #700, teaming again with Grant Morrison to tell another tale of Damian Wayne as Batman in the future as part of the oversized anniversary issue. In 2011 Kubert illustrated the DC miniseries Flashpoint. In 2013 Kubert wrote and drew Damian: Son of the Batman, a four-issue mini series about Robin in an alternate future. Kubert was one of the artists on The Dark Knight III: The Master Race which was co-written by Frank Miller and Brian Azzarello. In December 2017, Kubert is collaborating with writer Scott Snyder on the New Challengers, part of the Dark Metal project.Contact a speaker booking agent to check availability on Andy Kubert and other top speakers and celebrities.