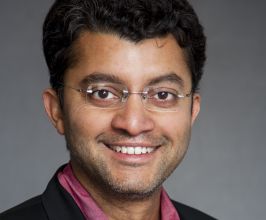 Book Anindya Ghose for your event

Anindya Ghose is the Heinz Riehl Chair Professor of Business at New York University’s Stern School of Business and the Director of the Masters of Business Analytics program at NYU Stern. Ghose is a foremost authority on the mobile economy, big data, and digital marketing.He has been a Visiting Professor at the Wharton School of Business. He serves as the Chief Data Scientist of 3TI World in China, Scientific Expert with Cornerstone Research and Scientific Advisor to OneVest in the United States. In 2014 he was named by the blog Poets and Quants as one of the Top 40 Professors Under 40 Worldwide and by Analytics Week as one the Top 200 Thought Leaders in Big Data and Business Analytics.He has consulted in various capacities for many leading Fortune 500 firms on realizing business value from IT investments, internet marketing, business analytics, mobile marketing, digital analytics, and social media. He has published more than 75 papers in premier scientific journals and peer-reviewed conferences and has given more than 200 talks internationally. He is a frequent keynote speaker in executive gatherings and thought-leading events globally. He is a winner of the NSF CAREER award and has been awarded 14 grants from Google, Microsoft, and several other corporations.His research analyzes the economic consequences of the Internet on industries and markets transformed by its shared technology infrastructure. He has worked on product reviews, reputation and rating systems, digital marketing, sponsored search advertising, wearable technologies, mobile commerce, mobile advertising, crowdfunding, and online markets. He also plays a senior advisory role to several start-ups in the Internet space. He has been interviewed and his research has been profiled numerous times in prominent media outlets including BBC, CNBC, The Wall Street Journal, NPR, The Economist, The New York Times, and Forbes.Before joining NYU Stern, Dr. Ghose worked in GlaxoSmithKline, as a Product Manager in HCL-Hewlett Packard, and as a Senior E-Business Consultant with IBM. He has a B. Tech in Engineering from the Regional Engineering College (NIT) in Jalandhar, and an M.B.A in Finance, Marketing, and Systems from the Indian Institute of Management, Calcutta. He received his M.S. and Ph.D. from Carnegie Mellon University’s Tepper School of Business.Contact a speaker booking agent to check availability on Anindya Ghose and other top speakers and celebrities.