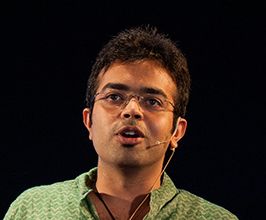 Book Anirudh Sharma for your event

Anirudh Sharma leads innovation at MIT spinoff Graviky Labs. He was 2014 MIT TR35 Innovator of the year, and in Forbes 30 under 30 in 2015. His work regularly features at TED Global, FastCo, WIRED, and other global conferences. Anirudh graduated from the Fluid Interfaces Group, at the MIT Media Lab. Anirudh is hands-on with science, crafting future-tech. He is passionate about creating ‘magic’ innovation through technology, the real and virtual worlds. His work seeks to push the boundaries of design and technology to create solutions with the power to impact our lives. He is interested in material sciences, augmented reality/VR, wearables at the fusion of art, impact and technology.Running an industry agnostic innovation lab that designs high impact finished tech. systems, IP and deploy them into the real world with strategic partnerships. Very interested at the cusp of futurist R&D and real world impact. I love to fuse hardware/data science and form aesthetics to create systems that solve real world problems!Some of that work has been academically published, used by brands, credited in press, patented, referenced by peers and released on the market in products used by consumers.Technically, I align in the magical interdisciplinary nature of computer interaction with areas of interest spanning across Wearable computing, Transparent displays, Augmented Reality, sensors, haptics, Stereoscopic interfaces, Multimodal Interfaces, sometimes magic and generative art.I co-led the activities at MIT Media Lab India Initiative 2013-2015. Before MIT, I designed haptic footwear for the visually impaired(Lechal), and co-founded Ducere Technologies Pvt. Ltd.Background in: Invention, Product Design, Rapid Prototyping, Gestural computing, Interface design, Magic as a performanceContact a speaker booking agent to check availability on Anirudh Sharma and other top speakers and celebrities.