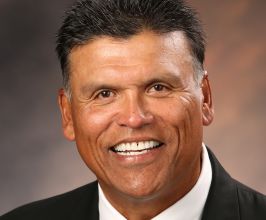 Book Anthony Munoz for your event

Considered by many as the greatest offensive lineman in NFL history, Anthony Muñoz has a record of excellence that is unrivaled in Professional Football. An eleven-time NFL Pro Bowl selection, Muñoz is the only Pro Football Hall of Fame inductee in Cincinnati Bengals history. Since retiring, Anthony and his family have remained in Cincinnati, where Muñoz has served as one of the community’s most accessible and involved advocates.A California native, Anthony excelled in football, basketball and baseball at Chaffey High School. He received a football scholarship to the University of Southern California, where he led the Trojans to the 1978 National Championship. Throughout his career at USC, he earned All-American and All-Conference awards.Anthony was selected by the Bengals as the third overall pick in the 1980 NFL Draft, and instantly became one of the league’s premier lineman. He led the team to two Super Bowls, three AFC Central Division titles and two AFC Championships (1981 and 1988).His diligent workout routine and commitment to fitness paved the way for a remarkable professional career in which he missed just three games in his first 11 years in the NFL.Muñoz was named the NFL Offensive Lineman of the Year in 1981, 1987, and 1988 and the NFL Players Association Lineman of the Year in 1981, 1985, 1988, and 1989. From 1980 to 1992, he started in 185 of 186 games, was selected to play in eleven consecutive Pro Bowl games (1981-1991). Anthony is also a member of the NFL 75th Anniversary All-Time Team.Anthony was recognized for his tireless community involvement while playing for the Bengals. He was the recipient of the Athletes in Action Bart Starr Award for Leadership in 1990, and was named the Cincinnati Bengals Man of the Year Award for five consecutive years. In 1991, he was honored as the NFL Walter Payton Man of the Year.Following his retirement, Muñoz received the ultimate honor for an athlete. He was elected into the Pro Football Hall of Fame in his first attempt on the ballot. In August of 1998, Muñoz was enshrined into the Hall of Fame in Canton, Ohio. He selected his son, Michael, to introduce him at the induction ceremonies.In 2002, Anthony established the Anthony Muñoz Foundation, a non-profit organization that engages the Tri-State region to impact area youth mentally, physically and spiritually. Since its inception, the foundation has impacted thousands of children and raised more than $12,000,000 for its eight impact programs and continues to grow.Contact a speaker booking agent to check availability on Anthony Munoz and other top speakers and celebrities.