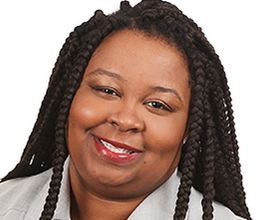 Book Antionette Carroll for your event

Antionette D. Carroll is the Founder and CEO of Creative Reaction Lab, a nonprofit social enterprise that educates, trains, and challenges cities to co-create solutions with Black and Latinx populations to design healthy and racially equitable communities. Within this capacity, Antionette has pioneered a new form of creative problem solving called Equity-Centered Community Design. Throughout her career, Antionette has worked for non-profits working for social justice, human rights, and diversity and inclusion. These experiences led to her background as a social entrepreneur, non-profit leader, and design activist. Antionette’s personal mission in life is to CHALLENGE standards, make CHANGE, and CHAMPION approaches resulting in foundational and community impact.Also, Antionette is an active community volunteer. Antionette was named the Founding Chair of the Diversity and Inclusion Task Force of AIGA: The Professional Association of Design in 2014. Currently, she’s the Chair Emerita of the Task Force working on long-term strategic initiatives such as the Design Census Program with Google and national Inclusivity in Design Summit. With her encouragement, AIGA created the first Racial Justice by Design program, with Antionette co-organizing and assuming the role of online producer for the national Town Hall in 2016. At the local level, she is currently serving as President Emerita of AIGA St. Louis and co-founder of the Design + Diversity Conference. Antionette also sits on several awards and programming committees for local and national non-profits, including the steering committee for The City of St. Louis’ Resiliency Office, supported by Rockefeller Foundation, and formerly the founding anti-bias/anti-racism committee for City Garden Montessori School.Antionette is a Next City Vanguard, 2017 Essence Magazine #100 Most Woke Woman, Subject Matter Advisor for Rockefeller Foundation’s 100 Resilient Cities, StartingBloc Fellow, and an American Express/Ashoka Emerging Innovator.Antionette also is an international speaker and facilitator, previously speaking at Microsoft, NASA, TEDxHerndon, AIGA National Conference, The Ohio State University, and more.Contact a speaker booking agent to check availability on Antionette Carroll and other top speakers and celebrities.