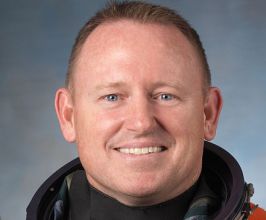 Book Barry Wilmore for your event

Barry E. Wilmore (Captain, U.S. Navy) is a veteran of two spaceflights and has accumulated over 175 days in space. In 2014, Wilmore served as a Flight Engineer for Expedition 41 until November when he assumed command of the station upon arrival of the Expedition 42 crew. He returned to Earth in March 2015. During this mission, he logged 167 days in space and performed four spacewalks. In 2009, Wilmore served as a pilot aboard Space Shuttle Atlantis for STS-129. Wilmore is from Mt. Juliet, Tennessee, and holds a Bachelor of Science and Master of Science in Electrical Engineering from Tennessee Technological University, where he was captain of the football team. He also has a Master of Science degree in Aviation Systems from the University of Tennessee. He is a captain in the U.S. Navy.Wilmore has accumulated more than 7,000 flight hours and over 650 carrier landings, all in tactical jet aircraft. He is a graduate of the United States Naval Test Pilot School (USNTPS). During his tenure as a fleet Naval officer and pilot, Wilmore completed four operational deployments, flying the A-7E and FA 18 aircraft from the decks of the USS Forrestal, USS Kennedy, USS Enterprise and the USS Eisenhower aircraft carriers. He has flown missions in support of Operations Desert Storm, Desert Shield and Southern Watch over the skies of Iraq, as well as missions over Bosnia in support of United States and NATO interests. Wilmore successfully completed 21 combat missions during Operation Desert Storm while operating from the flight deck of the USS Kennedy. His most recent operational deployment was aboard the USS Eisenhower with the “Blue Blasters” of Strike Fighter Squadron 34 (VFA-34), an F/A-18 squadron based at Naval Air Station Oceana, Virginia.As a Navy test pilot, Wilmore participated in all aspects of the initial development of the T-45 jet trainer to include initial carrier landing certification and high angle of attack flight tests. His test tour also included a stint at USNTPS as a systems and fixed wing Flight Test Instructor. Prior to his selection to NASA, Wilmore was on exchange to the United States Air Force as a Flight Test Instructor at the Air Force Test Pilot School at Edwards Air Force Base, California.Selected as an astronaut by NASA in July 2000, Wilmore reported for training in August 2000. Following the completion of two years of training and evaluation, he was assigned technical duties representing the Astronaut Office on all propulsion systems issues including the space shuttle main engines, solid rocket motor, external tank, and also led the astronaut support team that traveled to NASA’s Kennedy Space Center, Florida, in support of launch and landing operations. He completed his first flight as pilot on STS-129, where he logged more than 259 hours, or 11 days, in space. From September to November 2014, he served as Flight Engineer aboard the International Space Station for Expedition 41 and then as commander of Expedition 42 from November 2014 to March 2015.Contact a speaker booking agent to check availability on Barry Wilmore and other top speakers and celebrities.