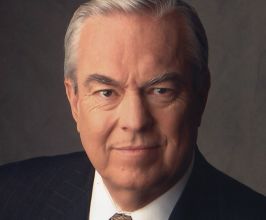 Book Bill Kurtis for your event

An acclaimed documentary host and producer, network and major market news anchor, multimedia production company president, and grass-fed cattle rancher, Bill Kurtis has been earning the respect of his peers and viewers for more than 46 years.Born in Florida and reared in Independence, Kansas after his father retired as a career Marine officer, Bill graduated from The University of Kansas with a Bachelor of Science degree in Journalism. He attended Washburn University School of Law where he was awarded a Juris Doctor degree.Bill Kurtis began his career at WIBW-TV in Topeka, Kansas. In 1966, after being recognized for his 24-hour coverage of a devastating tornado, Kurtis was hired by WBBM-TV in Chicago where he was field reporter and later anchor of The Channel Two News. In 1978, his investigative unit was first to report on the defoliant Agent Orange and how it affected American forces in Vietnam. In the course of covering that story, he returned to Vietnam in 1980 and found that children of American servicemen — Amer-Asians — were living in the streets of Saigon, their mothers unable to find jobs. It became a cover story in the New York Times Magazine. His reporting resulted in legislation that (1) allowed the children immediate access to the United States and (2) launched massive studies of Vietnam veterans to make Agent Orange exposure eligible for compensation and treatment. It established a new standard of care for veterans that continues to expand nearly 37 years after the War. In 1982, Kurtis became co-anchor of the CBS Morning News with Diane Sawyer. He returned to Chicago & WBBM-TV as anchorman from 1985-1996 and was reunited with co-anchor Walter Jacobson in the fall of 2010.Retiring after 30 years with CBS, he established Kurtis Productions, traveling to the far ends of the earth for the Peabody Award-winning series “The New Explorers,” which aired on PBS. Kurtis Productions also created programs for the A&E Television Network, including the long-running, award-winning “Investigative Reports” and “Cold Case Files” as well as “Investigating History” for The History Channel. Kurtis has also served as the host of A&E’s “American Justice” — the longest running non-fiction justice series on cable. “Cold Case Files” was nominated for 2004 and 2005 Primetime Emmys for Outstanding Nonfiction Series. Kurtis Productions helped launch the ‘golden age’ of documentaries on cable television and continues to produce such programming like “American Greed” on CNBC.One episode of “Investigative Reports” dealt with Richard Speck, convicted killer of eight student nurses in Chicago in 1966. It detailed his shocking lifestyle inside the Stateville Correctional Center, an indication that inmates were more in control of the prison than authorities. It resulted in the most sweeping changes to the penal system in Illinois history.Kurtis is also an author. “The Death Penalty on Trial: Crisis in American Justice” explores issues surrounding capital punishment in America and “On Assignment” explores some of the major stories he covered in his early career.In his home state of Kansas, Kurtis is an active conservationist. His 10,000-acre Red Buffalo Ranch is located in the Flint Hills, the largest remaining tract of tallgrass prairie in America.In 2005, Bill founded Tallgrass Beef Company to champion the environmental and health benefits of grass-fed cattle ranching. Today, Tallgrass Beef can be found in restaurants, supermarkets, and on the Internet.Mr. Kurtis is the recipient of numerous humanitarian, journalism and broadcasting awards.He is a member of the board of directors of several distinguished organizations including The Nature Conservancy of Illinois, the Rehabilitation Institute of Chicago, the Chicago Zoological Society, the Chicago Botanic Garden, the Field Museum of Chicago and the Abraham Lincoln Museum and Library in Springfield, Illinois.Contact a speaker booking agent to check availability on Bill Kurtis and other top speakers and celebrities.