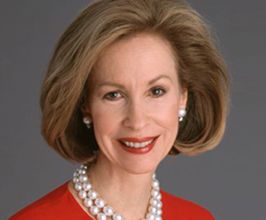 On June 18, 2004, Bonnie McElveen-Hunter was appointed Chairman of the American Red Cross by President George W. Bush, the first woman to be selected as Chairman in the organization?s 126-year history.

Book Bonnie McElveen-Hunter for your event

On June 18, 2004, Bonnie McElveen-Hunter was appointed Chairman of the American Red Cross by President George W. Bush, the first woman to be selected as Chairman in the organization’s 126-year history. Bonnie is the Founder and CEO of Pace Communications, the nation’s largest custom publishing company, ranked by Working Woman Magazine as one of the top 175 women-owned businesses, and former U.S. Ambassador to the Republic of Finland (2001-2003).During her term as U.S. Ambassador to Finland, Bonnie led several successful initiatives, including the Women Business Leaders Summit in Helsinki in 2002 for women from the Baltic Region and Russia. In 2003, she initiated Stop Child Trafficking: End Modern-Day Slavery and Children of Karelia. The program helped Finnish and Russian charities assist children at risk from drugs, crime, HIV/AIDS and trafficking. For her outstanding services, the President of Finland awarded Bonnie one of Finland’s highest honors — the Commander Grand Cross of the Order of the Lion.Following her work in Helsinki with women business leaders, Bonnie led a second Women’s Business Leaders Summit in 2004 in Riga, Latvia and most recently a third summit in 2007 in Amman, Jordan for women from Iraq, Palestine, Syria and other Middle Eastern nations. These Summits helped to advance entrepreneurship and encourage businesswomen from the Baltic Region to the Middle East to launch or expand business opportunities in their native countries.As a long-time philanthropist and charitable-cause activist, Bonnie has also served as a member of the International Board of Directors of Habitat for Humanity, chaired the Alexis de Tocqueville Society and served on the United Way of America Board as a member of its National Leadership Council. She is a founder of the United Way Billion Dollar National Women’s Leadership Initiative.Bonnie McElveen-Hunter is the recipient of numerous awards, including the Dr. Carl-Christian Rosenbröijer Award, “Woman Entrepreneur of the Year” Award from the National Foundation for Women Legislatures, National Athena Award for business and civic contributions from the U.S. Chamber of Commerce, and “Trailblazer of the Year” Award from the Women Leaders Forum. This past year Bonnie received the Ellis Island Medal of Honor, an Honorary Doctor of Humane Letters from North Carolina State University, and the Appeal of Conscience Public Service Award.She divides her time between Greensboro, North Carolina, and Washington, D.C. She is married to Bynum Merritt Hunter, an attorney with the law firm of Smith Helms. They have a 23-year-old son, Bynum Merritt Hunter, Jr., a 2005 graduate of Williams College.Contact a speaker booking agent to check availability on Bonnie McElveen-Hunter and other top speakers and celebrities.