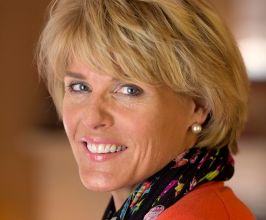 For almost three decades Caroline Adams Miller, MAPP has been a pioneer with her ground-breaking work in the areas of goal setting/accomplishment, grit, happiness and success. She is recognized as one of the world’s leading positive psychology experts on this research and how it can be applied to one’s life for maximum transformation and growth. In 2015, she was named “one of the ten Positive Psychology coaches to follow.”MEDIA PERSONALITY Caroline has been featured in hundreds of magazines, newspapers and other media around the world for several decades, including The New York Times, The Washington Post, USA Today, US News and World Report, ABC, CBS, NBC, NPR and CNN. She was the first Positive Psychology expert to bring coaching and happiness to satellite radio via XM with her “Positive Tip of the Day.”SPEAKER Caroline’s TEDx Talk on grit, The Moments That Make Champions has received great reviews. Angela Duckworth, winner of the 2013 MacArthur Fellowship for developing the Grit Scale, said about the presentation, “Beautiful talk by a paragon of grit! Bravo, Caroline!” Caroline’s keynotes and workshops inspire and empower her audiences to set and accomplish goals by using their grit, helping them to be more successful and happy in work and life. Past clients have included: Young Presidents’ Organization, Edward Jones, Morgan Stanley, WorkHuman, Columbia University, Brown Brothers Harriman & Co, The Wharton School and the American Society of Journalists and Authors.AUTHOR Caroline is the author of six books, including the bestselling My Name is Caroline (Doubleday 1988), which was an Alternate Selection of the Literary Guild, and Positively Caroline (Cogent 2013), its sequel. Creating Your Best Life (Sterling 2009), is the first mass market self-help book on the science of happiness and how it intersects with the science of accomplishing goals. It is used as a textbook in numerous coaching and Positive Psychology classes around the world, and was lauded by the “father of Positive Psychology,” Martin Seligman, in his book Flourish. Seligman says that Caroline “added a major missing piece to the world of coaching” because of her ground-breaking and evidence-based connection between Positive Psychology and success. Her workbook, Your Happiest Life, is a four-week guide to help users learn how to set and accomplish goals in a step-by-step way through science-based activities and proven techniques. Caroline’s next book, Getting Grit (SoundsTrue 2017), will discuss why this character strength is so important to a flourishing life, who has it, and how to cultivate, amplify, and teach it.PROFESSIONAL COACH Since 2000, Caroline has coached hundreds of individuals, from senior executives to professional athletes, and parents to politicians. She is a Professional Certified Coach (PCC) through the International Coach Federation.EDUCATOR Caroline is one of the first happiness experts to join and advise Happify, the world’s largest pioneering online tool dedicated to assessing and amplifying well-being through evidence-based games and activities. She created their goal-setting and grit tracks.Caroline is a popular presenter in the University of Pennsylvania’s Wharton Business School Executive MBA program, where she is considered one of the world’s experts on the science of goal-setting, grit and their intersection with Positive Psychology. She was an adjunct lecturer in Positive Psychology and coaching at NYU’s School of Continuing and Professional Studies, and at the University of Texas-Dallas School of Management for almost a decade. She does webinars and training for dozens of organizations, including the VIA Institute on Character about well-being, productivity, grit, and success.AWARDS Caroline was named the 2012 Good News Ambassador by the Good News Network, and in 2013, received the Mentoring award from the George Washington University School of Business for her decades of helping others achieve their goals.Caroline graduated magna cum laude from Harvard University and was one of the first 34 graduates of the University of Pennsylvania’s Masters of Applied Positive Psychology (MAPP) in 2006. She is a top-ranked Masters Swimmer in multiple events, has a black belt in Hapkido, and has more than three decades of unbroken recovery from bulimia.Contact a speaker booking agent to check availability on Caroline Adams Miller and other top speakers and celebrities.