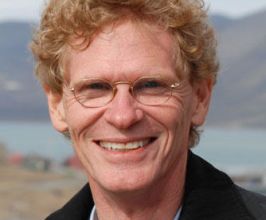 Biodiversity warrior Cary Fowler wants to save the world from agricultural collapse, one seed at a time.

Book Cary Fowler for your event

Dr. Fowler is perhaps best known as the “father” of the Svalbard Global Seed Vault, described by former UN Secretary General Ban Ki-moon as an “inspirational symbol of peace and food security for the entire humanity.” The Seed Vault provides ultimate security for more than 850,000 unique crop varieties, the raw material for all future plant breeding and crop improvement efforts. He proposed the creation of this Arctic facility to Norway, headed the international committee that developed the plan for its establishment, and now chairs the international council that oversees its operations.In the early 1990s, the UN’s Food and Agriculture Organization (FAO) recruited Dr. Fowler to lead the team to produce the first global assessment of the State of the World’s Plant Genetic Resources. He was responsible for drafting and negotiating the first FAO Global Plan of Action on the Conservation and Sustainable Utilization of Plant Genetic Resources, formally adopted by 150 countries in 1996. Following this, Dr. Fowler served as a Special Assistant to the Secretary General of the World Food Summit and represented the Consultative Group on International Agricultural Research (CGIAR/World Bank) in negotiations on the International Treaty on Plant Genetic Resources. He chaired a series of Nordic government sponsored informal meetings of 15 countries to facilitate negotiations for this treaty.In 2005 Dr. Fowler was chosen to lead the new Global Crop Diversity Trust, an international organization housed at the UN’s FAO in Rome. This position carried international diplomatic status. During his tenure, he built a sizable endowment and raised additional funds for international programs to conserve crop diversity and make it available for plant breeding. The Trust successfully implemented a global project to rescue 90,000 threatened crop varieties in developing countries and is now engaged in an effort to collect, conserve and pre-breed the wild relatives of more than 25 major crops.In 2015, US President Barack Obama appointed Dr. Fowler to the Board for International Food and Agricultural Development.Dr. Fowler is vice-chair of the Board of Trustees of Rhodes College. He serves on the boards of the NY Botanical Garden Corporation, the Lillian Goldman Charitable Trust and the Amy Goldman Charitable Trust. He is a former member of the National Plant Genetic Resources Board (appointed by the Secretary of Agriculture) and former board and executive committee member of the International Maize and Wheat Improvement Center in Mexico. He chaired the board of The Livestock Conservancy for two terms.Dr. Fowler attended Rhodes College in Memphis before transferring to Simon Fraser University in Canada where he received a B.A. (honors – first class) degree. He earned his Ph.D. at Uppsala University in Sweden. Dr. Fowler was a professor at the Norwegian University of Live Sciences for a number of years and a visiting professor at the University of California – Davis. He is currently a Visiting Scholar at Stanford University.He is the author of Shattering: Food, Politics and the Loss of Genetic Diversity, and a more academic book, Unnatural Selection: Technology, Politics and Plant Evolution, as well as Seeds on Ice: Svalbard and the Global Seed Vault.Cary Fowler is the recipient of several awards: the Right Livelihood Award, the Vavilov Medal, the Heinz Award, Bette Middler’s Wind Beneath My Wings Award, the William Brown Award of the Missouri Botanical Garden, the Thomas Jefferson Medal in Citizen Leadership, and three honorary doctorates. He is one of two foreign elected members of the Russian Academy of Agricultural Sciences.Dr. Fowler has been profiled in various major media: The New Yorker, CBS 60 Minutes, New Scientist and Wired Magazine, and is the subject of an award-winning feature-length documentary film, Seeds of Time. He has given a TED Talk, lectured widely at universities, and given hundreds of TV, radio and print media interviews.Originally from Tennessee, Cary Fowler makes his home on a small farm in the Hudson Valley of New York. He tends an orchard of more than 100 apple varieties and is engaged in the breeding of grass pea (Lathyrus sativus) as a hobby. The farm is home to a small herd of Red Poll cattle, a flock of Buckeye chickens (both rare breeds) and many amusing runner ducks and Pilgrim geese.Contact a speaker booking agent to check availability on Cary Fowler and other top speakers and celebrities.