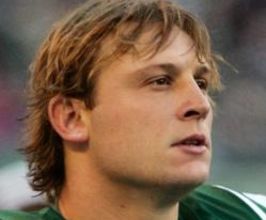 Chad Pennington has achieved significant statistical accolades over the course of his career.

Book Chad Pennington for your event

Chad Pennington has achieved significant statistical accolades over the course of his career. His pinpoint accuracy and unquestioned leadership have allowed him to lead two separate teams to the playoffs. For the 2011 NFL season he will use these same skills in the FOX Sports booth, calling NFL games for the network.On the field Chad Pennington is only the 2nd player to be named by The Associated Press as Comeback Player of the Year on two separate occasions. In 2008, Chad finished 2nd in MVP voting to Peyton Manning. Prior to that season he had signed a two-year contract with the Miami Dolphins on August 9, 2008, and ultimately led them to their first division title since 2000. He surpassed the 15,000 career passing yards milestone on October 19, 2008 against Baltimore.Chad was chosen by the New York Jets in the first round of the 2000 draft. He was the 18th overall pick and the first quarterback chosen that year.Chad suffered a high-ankle sprain in the first game of the 2007 season, but returned to see action in the next eight games. He completed the season with an 86.1 passer rating, and a 68.8 completion percentage, which was his second best in eight seasons with the Jets. In April of 2007, Chad was a recipient of a JB Award. Since 2004, the NFL Players Association (NFLPA) and PLAYERS INC. have partnered with James Brown of CBS Sports’ The NFL Today to recognize NFL players who exemplify leadership, dedication and commitment to team and community. JB Award recipients are nominated by their teammates upon the end of the season for their commitment to achieve excellence off the field through building better communities and stronger families.Named The Associated Press 2006 Comeback Player of the Year, Chad recovered from not one, but two rotator surgeries to play in each of the New York Jets’ 16 games that season, including a playoff appearance. He passed Vinny Testaverde to move up to fourth in the Jets history books for all-time career passing yards. His 13,738 career passing yards on 1,919 attempts for 1,259 completions place him behind only Joe Namath (27,057), Ken O’Brien (24,386) and Richard Todd (18,241).Chad led the Jets into the second round of the AFC Playoffs in 2002 and 2004, and first round action in 2006. He ranks first in completions (107), attempts (178), yards (1,166) and TDs (seven) in Jets’ postseason history.On the NFL Record books, Chad currently holds the all-time mark for career completion percentage, connecting on an astonishing 66% of his passes. Additionally, he has the 12th best QB rating in NFL history at 90.1.A Heisman Trophy finalist in 1999, Chad led Marshall University to a perfect 13-0 season. That same year, Chad was also a Rhodes Scholar finalist. He established numerous school records, including touchdowns (123), passing yards (14,098), completion percentage (63.3), completions (1,084), attempts (1,712) and yards in total offense (14,036). Chad was a GTE/CoSIDA Academic All-America first-team pick, and a two-time recipient of the Anson Mount Award, given by Playboy Magazine to the nation’s top student-athlete. An All-MAC first-team selection and offensive player of the year, Chad was also a finalist for the Davey O’Brien National Quarterback Award and the John Unitas Golden Arm Award. He completed 292-of-433 passes (67.4%) for 4,006 yards and 38 touchdowns in 13 games as a senior. In addition, Chad was selected to the GTE Academic All-District II Football Team for the second consecutive year.Chad and his wife, Robin created the 1st and 10 Foundation in 2003 with the mission to build stronger communities by funding programs and institutions that seek to improve the quality of life throughout West Virginia, Tennessee and South Florida. In addition to the 1st and 10 Foundation,Chad is active in the United Way program. He hosts a football camp in Knoxville each summer.Chad and his wife, Robin, have two sons, Cole and Luke. Chad’s father, Elwood, played football and basketball at Bluefield State College (1967-69).Contact a speaker booking agent to check availability on Chad Pennington and other top speakers and celebrities.