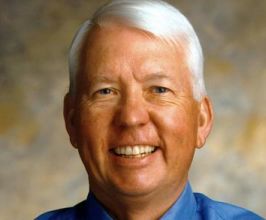 Book Charles Arntzen for your event

Charles J. Arntzen was appointed to the Florence Ely Nelson Presidential Endowed Chair at Arizona State University in Tempe in 2000 and as Regents Professor in 2004. He served as the Founding Director of The Biodesign Institute until May, 2003, and as Co-Director of the Center for Infectious Diseases and Vaccinology of that Institute until 2007. He has served as Director for two NIH-funded Cooperative Research Centers at ASU – one for Hepatitis C vaccine development, and a second for mucosal vaccines and microbicides to prevent sexually-transmitted infections.Dr. Arntzen held previous faculty positions at the University of Illinois and Michigan State University, and visiting professorships in the Laboratoire de Photosynthese du CNRS in France, the Department of Applied Mathematics in Canberra, Australia, and the Academia Sinica in Beijing, China. He also served as a research scientist with the USDA and as the director of the Michigan State University-Plant Research Laboratory (funded by the Department of Energy). In 1984 he joined the DuPont Company in Wilmington, Delaware as Director of Plant Science and Microbiology and was later promoted to Director of Biotechnology in the Agricultural Products Department. In 1988 he was appointed Dean and Deputy Chancellor for Agriculture at Texas A&M University, and subsequently served as Director of the University’s Plant Biotechnology Program of the Institute of Biosciences and Technology. From 1995-2000, Dr. Arntzen served as President and CEO of Boyce Thompson Institute – a not-for-profit corporation affiliated with Cornell University.Dr. Arntzen was elected to the U.S. National Academy of Sciences in 1983 and to the National Academy of Sciences in India the following year. He is a fellow of The American Association for the Advancement of Science (AAAS) and also of the American Society of Plant Biologists, received the Award for Superior Service from the U.S. Department of Agriculture for international project leadership in India, the American Society of Plant Biology Leadership in Science Public Service Award in 2004, and the Botanical Society of America Centennial Award in 2007. He received the degree of Doctor of Science honoris causa from Purdue University in 1997, the University of Minnesota in 2003, and the Hebrew University in Jerusalem in 2008. He has been a member of numerous national and international committees that serve general scientific interests, and in 2003 was awarded the Selby Fellowship by the Australian Academy of Sciences. He was a member of the Executive Committee of the Board of Governors of the University of Chicago for the Argonne National Laboratory and served as chairperson of their Science and Technology Advisory Committee. He served as chairman of the National Biotechnology Policy Board of the National Institutes of Health, as chairman of the National Research Council’s Committee on Biobased Industrial Products, and on the National Research Council’s Committee on Space Biology and Medicine. He served for eight years on the Editorial Board of SCIENCE. In 2011-12 he served as Chair of Section O “Agriculture, Food, and Renewable Resources” of the AAAS.Dr. Arntzen served until 1998 on the Board of Directors of DeKalb Genetics, Inc. and on the Board of Directors of Third Wave Agbio, Inc. and on the Scientific Advisory Board for Sumitomo Chemical Company in Osaka, Japan until 2001. He now serves on the Board of Directors of Advanced BioNutrition, Inc., and is on the Advisory Board of the Burrill and Companys Agbio Capital Fund and The Nutraceuticals Fund. He also serves as a Distinguished Advisor on the Council for Biotechnology. From 2001-2008 he served as a member of President George W. Bush’s Council of Advisors on Science & Technology in the Office of Science and Technology Policy, and in 2004 he was appointed by the President to serve on the National Nanotechnology Oversight Board from 2004-2008.Dr. Arntzen’s primary research interests are in plant molecular biology and protein engineering, as well as the utilization of plant biotechnology for enhancement of food quality and value, for expression of pharmacologically active products in transgenic plants, and for overcoming health and agricultural constraints in the developing world. He has been recognized as a pioneer in the development of plant-based vaccines for human disease prevention (with special emphasis on needs of poor countries) and for disease prevention in animal agriculture. Recently this research has been extended to creation of effective vaccines and therapeutics to reduce the threats of biowarfare agents.Dr. Arntzen received his bachelor’s and masters degrees from the University of Minnesota and his Ph.D. from Purdue University. He is married to Kathy (Lang) Arntzen, and the father of one son, Christopher Arntzen, a partner in the Corporate Division of the Baker and Botts law firm in Houston, Texas.Contact a speaker booking agent to check availability on Charles Arntzen and other top speakers and celebrities.