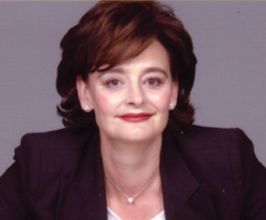 Cherie Booth is a trailblazer in her professional life and a dedicated wife and mother in her private life.

The New York Times wrote: “Cherie Blair is viewed as something of a wonder woman for her ability to balance her high-powered professional life, high-visibility public life and intensely consuming private life.” Her husband, Prime Minister Tony Blair, has given his wife credit for being “…an enormous source of strength and an extraordinary person in her own right. I never know how she manages with all the different things she does – the work, the family.”After studying Law at the London School of Economics (LSE), Cherie Booth was at the top of her class in her Bar examinations and was called to the Bar in 1976. She was the first (and still the only) person to earn an LSE law degree with a first class in all her subjects. She married Tony Blair in 1980 and in 1995 she became a Queen’s Counsel, which is a title held by only 10 percent of English lawyers. Currently, she specializes in Public, Employment and European Community Law at Matrix Chambers law group in London.Ms. Booth’s speech topics include: Human rights for women and children, balancing family and career, charity, public service and legal issues.Ms. Booth is also a published author. The Goldfish Bowl, written with social historian, Cate Haste, takes a closer look at the lives of other spouses of British Prime Ministers, whose lives transformed after the doors of 10 Downing Street closed behind them.Ms. Booth is President of Barnardo’s; Trustee, Refuge; Vice-President, 4 Children; Trustee, Citizenship Foundation; Patron, Breast Cancer Care; Patron, Cancer Care for Children; Patron, Victim Support London; Patron for Education for SCOPE; Patron, Greater London Fund for the Blind; Patron, Loomba Trust; Patron, Islington Music Centre; Patron, Refuge; Patron, Community Foundation for Merseyside; Patron, Opportunity Now Awards; Patron, Write4 GOSH Awards; Patron, Home Start Islington; Patron, Mary Ward Legal Centre; Patron, Noah’s Ark; Patron, Living Legends Awards; Patron, Downside Up; Patron, Age Exchange; Honorary Patron, Genesis Appeal; Patron, The Merlyn Trust; Patron, Chinese for Labour; Patron, Asian Women of Achievement Awards; Patron, Believe to Achieve; Patron, Michael Palin Centre Appeal for Stammering Children; Patron, European Federation of Black Women Business Owners; Honorary President, Plater College; Vice-President, Family Mediators Association and Ambassador, Weston Spirit.Ms. Booth is the Chancellor and Honorary Fellow of Liverpool John Moores University (JMU), Governor and Honorary Fellow of the London School of Economics and the Open University, Fellow of the Royal Society of Arts, Honorary Fellow of the Institute of Advanced Legal Studies, a Doctor of Laws (Westminster University) and a Fellow of the International Society of Lawyers for Public Service. She is a Bencher of Lincolns Inn London as well as honorary Bencher of Kings Inn Dublin.Away from work Ms. Booth likes to spend as much time as possible with her children- Euan, Nicholas, Kathryn, and Leo. Her other interests include reading, the theatre and keeping fit.Contact a speaker booking agent to check availability on Cherie Booth Blair and other top speakers and celebrities.