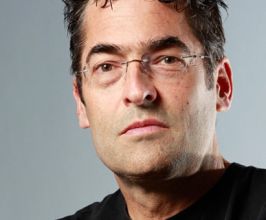 Book Chris Jordan for your event

Chris Jordan is Seattle-based photographic artist who first became known for his large-scale color photographs of the detritus of American consumer culture, in a series entitled “Intolerable Beauty: Portraits of American Mass Consumption”. His project, “Running the Numbers: An American Self-Portrait”, has established Jordan as an internationally acclaimed artist and spokesperson for social change.When “Running the Numbers” was first released in early 2007, it quickly went viral on the internet. Since then Jordans website has averaged 75,000-100,000 visitors per month, and Jordan is inundated daily by emails and phone calls from all over the world from individuals and organizations responding to his work. His images have been featured in hundreds of magazines, newspapers, television features, documentary films, books, school curriculums and blogs around the globe, and he has been invited to exhibit his work in art museums, festivals and public venues in the U.S., Asia, Europe and South America. He has been asked to speak at numerous colleges and universities in the U.S. and internationally, as well as at conferences such as the TED Conference, the EG Conference, the Leadership Gathering, the GEL Conference, the PopTech Conference, the Greener Gadgets Conference, and the Mountainfilm Festival.Jordan was chosen by National Geographic Channels International to serve as their Eco-ambassador for Earth Day 2008. In April 2008, they sponsored a month-long tour in Asia and Europe, where Jordan exhibited his prints and gave public talks, workshops, and interviews. In May 2008, Jordan traveled to Caracas, Venezuela, by invitation of the mayor, to exhibit his work and spend a week making school visits and giving public talks and workshops. The exhibition traveled around Venezuela in 2008.In November 2008, Jordan was invited to Dubai, United Arab Emirates to participate in the World Economic Forum summit. He is a member of the Board of Directors of the New American Dream Foundation. His work recently won the prestigious the Green Leaf Award from the United Nations Environmental Programme, presented at the Nobel Peace Center in Oslo, Norway. In 2008, the Running the Numbers series was one of three finalists for the international Darmstadt Photographic Prize in Germany and a finalist for the new Green Prix Award in the U.S.Jordan has a traveling exhibition that visits art and science museums around the U.S. and overseas.Jordan also directed a film titled MIDWAY, that leads viewers on a rich visual journey through the many layers of Midway Islands stunning paradox. There, in the poetic beauty of the mythical Albatross, is a shocking human-caused environmental tragedy that we are challenged to witness head on. Filmed in the heart of the Pacific Ocean, MIDWAY walks the viewer into beauty, grief, horror and joy, intertwined and dancing, as a potent metaphor for our times.Contact a speaker booking agent to check availability on Chris Jordan and other top speakers and celebrities.