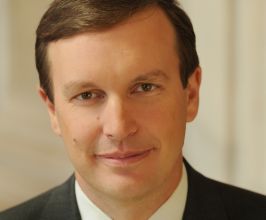 Book Chris Murphy for your event

Senator Christopher S. Murphy is the junior United States Senator for Connecticut. Elected in 2012, Murphy serves on the Appropriations Committee, the Health, Education, Labor, and Pensions (HELP) Committee, the Foreign Relations Committee, and the Democratic Steering & Outreach Committee.Prior to his election to the U.S. Senate, Murphy served Connecticut’s Fifth Congressional District for three terms in the U.S. House of Representatives. The Fifth District includes the towns of Danbury, Meriden, New Britain, Torrington, and Waterbury. During his three terms, Murphy served on the Foreign Affairs Committee, the Committee on Oversight and Government Reform, the Energy and Commerce Committee, and the Committee on Financial Services.Before his service in the U.S. Congress, Murphy served for eight years in the Connecticut General Assembly. He spent four years representing Southington and the 81st district in the House, and then spent four years representing the 16th Senatorial District, which includes the towns of Waterbury, Wolcott, Cheshire and Southington. While in the Senate, he served as the Chairman of the Public Health Committee.Senator Murphy grew up in Wethersfield, Connecticut, and attended Williams College in Massachusetts. In 2002, he graduated from UConn Law School in Hartford, Connecticut. He practiced real estate and banking law from 2002-2006 with the firm of Ruben, Johnson & Morgan in Hartford.On August 18, 2007, Murphy married Cathy Holahan, an attorney. They have two sons named Owen and Rider.Contact a speaker booking agent to check availability on Chris Murphy and other top speakers and celebrities.