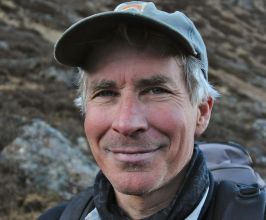 Book David Breashears for your event

Filmmaker, adventurer, and mountaineer David Breashears has combined his skills to become one of the world’s most revered adventure filmmakers, an author, and coveted speaker lecturing on a range of topics including leadership, motivation, and teamwork.Breashears has worked on more than 45 films, and has reached the summit of Everest five times. He has directed, produced and photographed films for PBS, National Geographic, BBC, ABC, NBC, Working Title Films, and Universal Pictures. Breashears was Co-Producer, Co-Director and Expedition Leader of the most highly acclaimed IMAX film of all time, Everest.Breashears has received numerous awards for achievements in filmmaking, including four Emmy Awards, and has published three bestselling books: “Everest: Mountain Without Mercy,” “Last Climb,” and his memoir “High Exposure.”Breashears is Senior Lecturer Faculty Member at MIT’s Sloan School of Management’s Leadership Center. He also serves as Faculty Member at the United States’ Naval Postgraduate School’s Center for Executive Education recurrently presenting “Leadership in Crisis.” He speaks on a range of topics including leadership, motivation, teamwork, team building, and safety.Breashears is the founder, Executive Director and Principal Photographer of the non-profit organization, GlacierWorks, whose mission is to globally inspire mitigation and adaptation through the power of his images documenting the gradual disruption of the vital, relied upon flow of water from Asia’s glacier systems.Contact a speaker booking agent to check availability on David Breashears and other top speakers and celebrities.