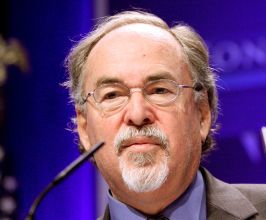 Nationally Known Author & Lifelong Civil Rights Activist, One of the Founders of the New Left

Book David Horowitz for your event

David Horowitz is a nationally known author and lifelong civil rights activist. He was one of the founders of the New Left in the 1960s and editor of its largest magazine, Ramparts. In the 1970s, he created the Oakland Community Learning Center, an inner city school for disadvantaged children that was run by the Black Panther Party.In the 1990s, he created the Individual Rights Foundation, which led the battle against speech codes on college campuses, and compelled the entire “president’s cabinet” of the University of Minnesota to undergo five hours of sensitivity training in the First Amendment for violating the free speech rights of its students. In 1996, he was a spokesman for the California Civil Rights Initiative, which barred government from discriminating against “or granting preferential treatment to any individual or group on the basis of race, sex, color, ethnicity, or national origin.” In 2002, he joined Ward Connerly’s campaign to pass a Racial Privacy Initiative. This is an anti-racial profiling initiative that would prevent government agencies from asking citizens about their race. Horowitz is an outspoken opponent of censorship and racial preferences, and a defender of the rights of minorities and other groups under attack — including the rights of blacks, gays, women, Jews, Muslims, Christians, and white males.Horowitz is the author of numerous books including an autobiography, Radical Son, which has been described as “the first great autobiography of his generation,” and which chronicles his odyssey from radical activism to the current positions he holds. Among his other books are The Politics of Bad Faith; Hating Whitey; Left Illusions; The Party of Defeat; Unholy Alliance; Uncivil Wars; The Professors: the 101 Most Dangerous Academics in America; Indoctrination U; One Party Classroom; and Reforming our Universities.His book The Art of Political War was described by White House political strategist Karl Rove as “the perfect guide to winning on the political battlefield.”In 1988, Horowitz created the Center for the Study of Popular Culture as a vehicle for his campaigns. It was renamed the David Horowitz Freedom Center in July 2006 to institutionalize his campaigns against the Left and its anti-Americanism. The Center is supported by 100,000 contributors and publishes FrontpageMagazine.com, an online magazine, which receives a million page views per month and features columnists Ann Coulter and Andrew Sullivan, and libertarian talk show host Larry Elder. He is also the founder of Students for Academic Freedom, a nation-wide coalition of 200 student groups dedicated to promoting intellectual diversity and academic freedom at America’s colleges and universities.Horowitz has spoken at over 300 colleges and universities. He has appeared on “Nightline,” “Crossfire,” “Today,” “Hannity and Colmes,” the “O’Reilly Factor,” “Good Morning America,” C-SPAN, CNBC, Fox News Channel, “CBS This Morning,” “MSNBC,” and is appearing regularly on the Dennis Miller Show, and gives hundreds of interviews yearly on radio and television.Contact a speaker booking agent to check availability on David Horowitz and other top speakers and celebrities.