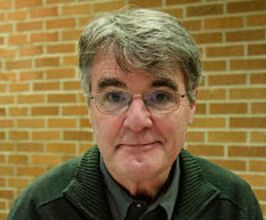 David Macaulay gets under the skins of skyscrapers, mosques, pyramids, subways, and a host of other ancient and modern marvels. His lavish and micro-detailed renderings expose the world’s secret engineering to dazzled readers of all ages.

Book David Macaulay for your event

Born on December 2, 1946, David Macaulay was eleven when his family moved from England to the United States. Not surprisingly, he continued to grow up and in 1969 received his bachelor of architecture degree from Rhode Island School of Design after spending his fifth year in Rome on the European Honors Program.In January 1973, after a couple of years of dabbling and a bit of luck, Macaulay was off to France to work on the first of his twenty five books, Cathedral. He then constructed a colonial Roman town (City, 1974), erected monuments to the Pharaohs (Pyramid, 1975), dissected the maze of subterranean systems below and essential to every major city (Underground, 1976), built a medieval fortress (Castle, 1977) and dismantled the Empire State Building (Unbuilding, 1980).Macaulay is probably best known for a very thick book called The Way Things Work (1988). Co-authored by Neil Ardley, this exhaustively researched compendium presents the hows and whys of much of the technology we take for granted. It was followed by Black and White (1990), a considerably slimmer volume and winner of the 1991 Caldecott Medal. 1997 saw the publication of a pigeon lead tour of the Eternal City called Rome Antics, and in the fall of 1998, The New Way Things Work, a revised edition of the ’88 book lumbered onto the stands. Building Big, the companion book to a five part PBS television series about major engineering feats around the world was published in 2000 and two years later Rome and pigeons once again took center stage for a book called Angelo.In response to the events of September 11, Mosque was published in 2003 and that same year work began on a book about the workings of the human body. The Way We Work was published in 2008. For his most recent book, Built to Last, Macaulay slipped into reverse and re-illustrated both Cathedral and Castle, only this time in color. In 2009, David Macaulay Studio, an imprint of Roaring Brook Publishers, was founded to produce books that ‘explain’ things. Four short nonfiction books for reluctant readers are the first publications to emerge from this new enterprise.In 2006, Macaulay was named a MacArthur fellow and turned sixty though the two are not related.Contact a speaker booking agent to check availability on David Macaulay and other top speakers and celebrities.