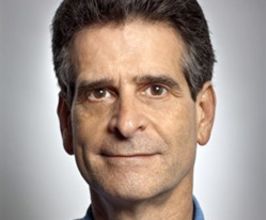 Book Dean Kamen for your event

Dean Kamen is an inventor, an entrepreneur, and a tireless advocate for science and technology. His roles as inventor and advocate are intertwined—his own passion for technology and its practical uses has driven his personal determination to spread the word about technology’s virtues and by so doing to change the culture of the United States.As an inventor, he holds more than 1000 U.S. and foreign patents, many of them for innovative medical devices that have expanded the frontiers of health care worldwide. While still a college undergraduate, he invented the first wearable infusion pump, which rapidly gained acceptance from such diverse medical specialties as oncology, neonatology, and endocrinology. In 1976, he founded his first medical device company, AutoSyringe, Inc., to manufacture and market the pumps. Then, working with leading diabetes researchers, Kamen pioneered the design and adoption of the first portable insulin pump. It was quickly demonstrated that using a pump could much more effectively control patients’ blood glucose levels. At age 30, he sold AutoSyringe to Baxter Healthcare Corporation.Following the sale of AutoSyringe, Inc., he founded DEKA Research & Development Corporation to develop internally generated inventions as well as to provide research and development for major corporate clients. Kamen led DEKA’s development of the HomeChoiceTM peritoneal dialysis system for Baxter International Inc. The HomeChoiceTM system allows patients to be dialyzed in the privacy and comfort of their home and quickly became the worldwide market leader. Kamen also led the development of technology to improve slide preparation for the CYTYC (now Hologic Inc.) ThinPrep® Pap Test. Kamen-led DEKA teams have also developed critical components of the UVARTM XTSTM System, an extracorporeal photophereisis device marketed by Therakos, a unit of Johnson & Johnson, for treatment of T-Cell lymphoma. An advanced prosthetic arm in development for DARPA should advance the quality of life for returning injured soldiers. Other notable developments include the HydroflexTM surgical irrigation pump for C.R. Bard, the CrownTM stent, an improvement to the original Palmaz-Schatz stent, for Johnson & Johnson, the iBOTTM mobility device, and the Segway® Human Transporter.Kamen has received many awards for his efforts. Notably, Kamen was awarded the National Medal of Technology in 2000. Presented by President Clinton, this award was in recognition for inventions that have advanced medical care worldwide, and for innovative and imaginative leadership in awakening America to the excitement of science and technology. Kamen was elected a member of the National Academy of Engineering in 1997. He was awarded the Lemelson-MIT Prize in 2002, and was inducted into the National Inventors Hall of Fame in May 2005. He is a Fellow of the American Institute for Medical & Biological Engineering, as well as many other national and international engineering organizations.In addition to DEKA, one of Kamen’s proudest accomplishments is founding FIRST (For Inspiration and Recognition of Science and Technology), an organization dedicated to motivating the next generation to understand, use and enjoy science and technology. Founded in 1989, this year FIRST will serve more than 1,000,000 young people, ages 6 to 18, in more than 113 countries around the globe. Last year, high-school-aged participants were eligible to apply for more than $80 million in scholarships from over 200 leading colleges, universities, and corporations.Contact a speaker booking agent to check availability on Dean Kamen and other top speakers and celebrities.