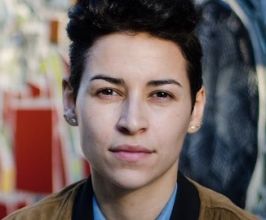 Book Denice Frohman for your event

DENICE FROHMAN is an award-winning poet, writer, performer, and educator. Born and raised in New York City, she is a CantoMundo Fellow, 2014 National Association of Latino Arts & Cultures grant recipient, 2013 Women of the World Poetry Slam Champion, 2013 Hispanic Choice Award winner (Creative Artist of the Year), and former Leeway Transformation Award recipient. Her work has appeared or is forthcoming in The Adroit Journal, The Acentos Review, Winter Tangerine, ESPNW, Split This Rock’s The Quarry, APIARY, Narrative Northeast, and Huffington Post. Her work can also be found in the following books, Nepantla: An Anthology Dedicated to Queer Poets of Color (Nightboat Books); Women of Resistance: Poems for a New Feminism (OR Books); Jotas: An Anthology of Queer Latina Voices (Korima Press/forthcoming); Reading, Writing, and Rising Up: Teaching About Social Justice and the Power of the Written Word (Rethinking Schools, 2nd ed.).Her work has been commissioned by The Metropolitan Museum of Art, ESPN, mitú, the City of Philadelphia, GALAEI (Gay and Lesbian Latino Aids Education Initiative), and Twitter as part of the #HereWeAre campaign to uplift women’s voices, which aired on national television.She has been a featured speaker and performer at over 200 colleges and universities; and hundreds of K-12 schools, cultural arts spaces, non-profit organizations, youth detention centers, and conferences across the country, including The White House in 2016. Her poems have collectively garnered over 10 million views online and she has been featured in Buzzfeed, Cosmopolitan, Refinery 29, AutoStraddle, and Upworthy.As a queer woman from a multi-cultural background (Puerto Rican and Jewish), her work focuses on identity, social change, disrupting notions of power, and celebrating the parts of ourselves deemed unworthy. She hopes to inspire people, particularly young folks of color, to see themselves as writers and to tell their own stories.As a former Program Director at The Philly Youth Poetry Movement – a literary and youth empowerment non-profit organization – she worked to create safe spaces for Philadelphia teens to discover the power of their voices. Her passion to mentor and work with young people has always been a central part of her work. She also earned her Master’s in Education from Drexel University.She has been interviewed by CNN, 6ABC, WURD, WHYY, Philadelphia Weekly, and Univision 65. She also appeared on ESPN’s “One Nacion” TV special and Lexus’ Verses and Flow on TV One. She has worked with digital media companies and brands to write creative content; collaborated on projects with classical music foundations, theaters and non-profits; and written original spots for TV campaigns (see commissioned work for more info).Other notable speaking engagements and performances include: Cannes Lion International Festival of Creativity (France), Lincoln Center, ACLU (PA), TedxPhilly, the National Latino Association of Arts and Culture Awards, Nuyorican Poets Cafe, Office of LGBT Affairs (Philadelphia), WPP Stream conference, U.S Hispanic Leadership Institute and more. She was named “Top 20 Emerging LGBT Leader” by the Philadelphia Gay Newspaper, and one of “5 LGBTQ Latinx Hereos for Every Classroom” by GLSEN.Her secret passion is songwriting and she played professional basketball in Puerto Rico after college where she earned a four-year athletic scholarship.Currently, she tours the country and is based in Philadelphia.Contact a speaker booking agent to check availability on Denice Frohman and other top speakers and celebrities.