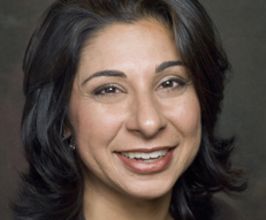 Book Dolly Chugh for your event

Dolly Chugh is an award-winning, tenured professor at the New York University Stern School of Business. She studies implicit bias and unintentional unethical behavior (“bounded ethicality”). Dolly teaches MBA courses in leadership, management, and negotiations, and is the faculty chair of the LAUNCH Orientation program. She studies socially charged issues like race and gender, and brings these normally undiscussed issues into the MBA classroom. Her goal is to engage business students in important societal issues and to equip them to do the same with others. Dolly writes a monthly column about race, gender, diversity, inclusion, and bias for Forbes.com. Her first book, The Person You Mean to Be: How Good People Fight Bias (HarperCollins), came out on September 4, 2018.Dolly’s research integrates the theories and methods of social psychology, behavioral economics, judgment and decision making, sociology, and education. Dolly has published more than 20 articles and book chapters on these topics in top managerial and academic publications, such as the Harvard Business Review, Psychological Science, Social Justice Research and The American Economic Review. Her work has appeared in Lean In by Sheryl Sandberg and What Works by Iris Bohnet, as well as a recent White House Council of Economic Advisors Issue Brief. She has appeared live on the Melissa Harris-Perry Show on MSNBC, and her research is regularly featured in numerous media outlets, including National Public Radio, NBC News, Scientific American, Forbes, The Washington Post, CosmoGirl, The New York Times, The Economist, The Huffington Post, The Financial Times, and The Stanford Social Innovation Review. Her first-authored Sunday New York Times Op-Ed, titled “Professors Are Prejudiced, Too” (with Katherine Milkman and Modupe Akinola), was in that weekend’s Top 20 most-emailed/read/tweeted articles.Dolly has been named one of the Top 100 Most Influential People in Business Ethics (a list that included Pope Francis, Angelina Jolie, and Bill Gates) by Ethisphere Magazine, a finalist for the Faculty Rising Star Pioneer Award by the Aspen Institute, and the recipient of the prestigious New York University Dr. Martin Luther King, Jr. Faculty Award (whose past recipients include Bryan Stevenson). As one of the most highly rated business school professors at New York University, she received the Stern School of Business Teaching Excellence Award in 2015.Prior to becoming an academic, Dolly worked at Morgan Stanley, Time Inc., Scholastic, and Merrill Lynch. Dolly received a B.A. from Cornell University, where she earned a double major in Psychology and Economics and served as a two-time co-captain of the Varsity Tennis Team (1990); an M.B.A. from the Harvard Business School (1994); and a Ph.D. in Organizational Behavior / Social Psychology from Harvard University (2006).In addition, Dolly has played a central role as a faculty member in the KIPP Charter School network’s renowned School Leadership Programs since 2008. She also mentors four first-generation college students and their families. Additionally, she teaches and runs a book club in a men’s prison through the NYU Prison Education Program.Contact a speaker booking agent to check availability on Dolly Chugh and other top speakers and celebrities.