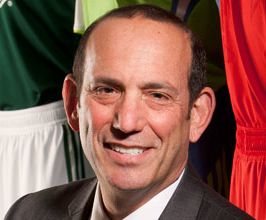 Book Don Garber for your event

Don Garber has spent his entire career in the sports industry, working in a variety of capacities in marketing, television and League administration. On August 4, 1999, he was named Commissioner of Major League Soccer after spending 16 years with the National Football League.Since Garber accepted Major League Soccer’s top position, his vision and leadership have enabled MLS to build a strong foundation for professional soccer in the United States. Garber has guided MLS through decisions that have solidified the League’s core business, guaranteed its long-term viability and positioned it for growth. During his tenure, MLS has added 15 new investors, expanding and diversifying the League’s ownership group, including nine new expansion teams. Garber has also led the effort to develop soccer-specific stadiums for MLS teams. Twelve stadiums have been built during his tenure, and two more have been renovated with soccer in mind. Also, more soccer-specific stadiums are currently in development.In late 2001, Garber restructured MLS and spearheaded the formation of Soccer United Marketing (SUM), a company owned by MLS investors that is the preeminent commercial soccer entity in North America. SUM represents several prominent soccer properties, including the U.S. Soccer Federation, the CONCACAF Gold Cup and Champions League, the Mexican Soccer Federation, FC Barcelona and Chivas de Guadalajara. In addition, SUM has managed North American tours for some of the world’s most prestigious soccer clubs, including Manchester United and Real Madrid. SUM previously owned the English-language television rights for the FIFA Men’s World Cup in Germany 2006 and Korea/Japan in 2002, plus the 2003 FIFA Women’s World Cup.In 2006, Garber secured long-term national television agreements for Major League Soccer with major national television partners, including ABC/ESPN and Univision, an unprecedented accomplishment for the sport in the United States. Recently, MLS announced a three-year media rights agreement with NBC Sports, which commenced at the start of the 2012 MLS season. Additionally, Garber has implemented groundbreaking player initiatives such as the MLS Designated Player Rule and created the MLS Youth Development Initiative, positioning the League as the leader of the sport that now totals more than 24 million participants in the United States and is the largest participatory sport in Canada. In 2007, Garber formed MLS W.O.R.K.S, the League’s community outreach initiative, dedicated to addressing important social issues affecting young people throughout America.Prior to becoming Commissioner of MLS, Garber spent 16 years with the National Football League, finishing his tenure as the senior vice president/managing director of NFL International, where he was responsible for managing all of the NFL’s business outside the United States. Garber began his career at NFL Properties in 1984 and became the League’s director of marketing in 1988. In 1992, he was appointed the NFL’s senior vice president of business development and was responsible for a variety of television, special event and marketing activities.Garber serves on the Board of Directors for the United States Soccer Federation, The United States Soccer Foundation, FC Harlem Youth Soccer Club and the Board of the Hope and Heroes Foundation at Columbia Presbyterian Hospital in New York. He is on the Board of Advisors for New York University’s Tisch School for Hospitality, Tourism and Sports Management, the University of Central Florida, DeVos Sports Business Management Program and the World Congress of Sports.Garber has received numerous community and industry honors during his career, including the 2008 March of Dimes Sports Leadership award and the 2007 UJA Federation Sports for Youth award for his a strong commitment to caring for the community. Garber was a finalist for the SportsBusiness Journal and SportsBusiness Daily’s 2008 Sports Executive of the Year, a year that saw Major League Soccer named the Professional Sports League of the Year by the industry. He was listed among the most influential people in American sports in 2008 by Time Magazine and Business Week, and has been named among the top 50 most influential people in sports business by the SportsBusiness Journal each of the last five years.Contact a speaker booking agent to check availability on Don Garber and other top speakers and celebrities.