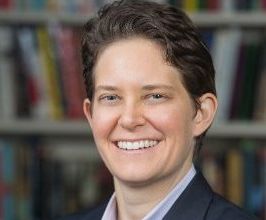 Book Dorie Clark for your event

Dorie Clark is a marketing strategy consultant, professional speaker, and frequent contributor to the Harvard Business Review, TIME, Entrepreneur, and the World Economic Forum blog. Recognized as a “branding expert” by the Associated Press, Fortune, and Inc. magazine, she is the author of Reinventing You: Define Your Brand, Imagine Your Future (Harvard Business Review Press, 2013), which has been translated into Russian, Chinese, Arabic, French, Polish, and Thai. Her most recent book, Stand Out: How to Find Your Breakthrough Idea and Build a Following Around It, was released by Portfolio/Penguin in April 2015.Clark consults and speaks for a diverse range of clients, including Google, the World Bank, Microsoft, Morgan Stanley, the Ford Foundation, the Bill & Melinda Gates Foundation, Yale University, the Mount Sinai Medical Center, and the National Park Service.Clark, a former presidential campaign spokeswoman, is an adjunct professor of business administration at Duke University’s Fuqua School of Business and a Visiting Professor for IE Business School in Madrid, Spain. She has taught marketing and communications at Tufts University, Suffolk University, Emerson College, HEC-Paris, Babson College, the University of North Carolina’s Kenan-Flagler School of Business, and Smith College Executive Education. She has been named to the Huffington Post’s “100 Must Follow on Twitter” list for 2013 and 2014, and to the #Nifty50 list of top women on Twitter. She was also named one of Inc. magazine’s “100 Great Leadership Speakers for Your Next Conference,” and recognized in Forbes as one of “25 Professional Networking Experts to Watch in 2015.”She has guest lectured at universities including Harvard Business School, the Harvard Kennedy School, Stanford University’s Graduate School of Business, the University of Pennsylvania’s Wharton School of Business, the University of California-Berkeley’s Haas School of Business, Georgetown, NYU, the MIT Sloan School of Management, and the University of Michigan. Her work has been published in the Harvard Business Review Guide to Getting the Right Job and the Harvard Business Review Guide to Networking, and she is quoted frequently in the worldwide media, including NPR, the BBC, and MSNBC.A former New England Press Association award-winning journalist, Clark is also the director of the environmental documentary film, The Work of 1000. She currently serves as co-chair of the Board of Visitors of Fenway Health and is a member of the Board of Overseers for the Massachusetts Society for the Prevention of Cruelty to Animals.At age 14, Clark entered Mary Baldwin College’s Program for the Exceptionally Gifted. At 18, she graduated Phi Beta Kappa from Smith College, and two years later received a Master of Theological Studies from Harvard Divinity School.Contact a speaker booking agent to check availability on Dorie Clark and other top speakers and celebrities.