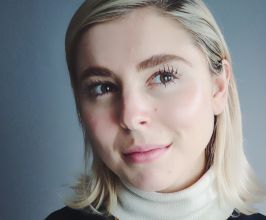 Book Eliza McNitt for your event

Eliza McNitt is a writer and director. Her work has been described by the New York Times as “beautiful and surprising.” She explores the cosmic collision of science and art. From astronauts to astrophysicists, McNitt works alongside scientists to tell stories about the human connection to the cosmos. Her films and VR experiences have appeared at festivals including Sundance, SXSW, Hot Docs, Cannes NEXT, AFI Fest, and Tribeca. She’s a two time Intel Science Fair winner, OneFifty creator, Alfred P. Sloan grant recipient, and winner of a 2018 Gold Screen Young Director’s Award at Cannes Lions. McNitt is the creator of FISTFUL OF STARS a VR experience following the journey of The Hubble Telescope through the cosmos. Her VR series SPHERES – Executive Produced by Darren Aronofsky and Ari Handel – is an episodic journey through the songs of spacetime. SPHERES stars Jessica Chastain and Patti Smith as the voice of the cosmos. SPHERES made history at the Sundance Film Festival as the world’s first ever acquisition of a VR experience.Eliza found filmmaking through science. A top winner of the Intel International Science and Engineering Fair for her research on Honeybee Colony Collapse Disorder, Eliza’s first film was inspired by a desire to communicate the devastating impact of vanishing honeybees. Her honeybee research received the Connecticut Academy of Science and Engineering’s Gerber Medal–the state’s highest award for student science research–as well as special awards from The Harvard-Smithsonian Observatory, MIT-Lincoln Lab, the Audubon Society, CERN (The European Organization for Nuclear Research), the Connecticut Women’s Hall of Fame, Pfizer, the United States Armed Forces, the United States Air Force, and Connecticut Governor Jody Rell.Her documentary Requiem for the Honeybee was broadcast internationally. Since then, Eliza has developed a passion for telling science as storytelling. At NYU’s Tisch School of the Arts, Eliza was the winner of an Alfred P. Sloan Foundation Production Grant for her film Without Fire which was filmed on the Navajo Reservation in Arizona, starring Magdalena Begay (Drunktown’s Finest) and Misty Upham (Frozen River, August: Osage County). Eliza’s short film Artemis Falls starring Adepero Oduye (Pariah, 12 Years A Slave) was commissioned by TED and follows an astronaut on her journey into space. Her unique voice as a director, fusing science with narrative storytelling has been supported by The Alfred P. Sloan Foundation, TED, Google, Intel, Samsung, VICE, and Time Warner OneFifty.She is the creator of Fistful of Stars a Virtual Reality experience following the journey of The Hubble Telescope through the cosmos that drew an audience of over 6,000 people at BRIC! Celebrate Brooklyn and was the world’s largest communal virtual reality experience to date. She is an artist-in-residence with Time Warner OneFifty and a member of the New Museum’s NEW INC, an incubator to foster innovative projects in art and technology.Contact a speaker booking agent to check availability on Eliza McNitt and other top speakers and celebrities.