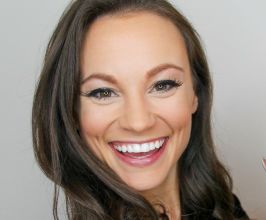 Book Emily Calandrelli for your event

Emily Calandrelli is the host and co-executive producer of the hit Netflix series “Emily’s Wonder Lab.” Each episode features Calandrelli and a group of kid-scientists as they learn about STEAM through experiments and fun activities. Calandrelli is also an Executive Producer and Emmy nominated host of FOX’s “Xploration Outer Space” and was a correspondent on Netflix’s “Bill Nye Saves The World.”Calandrelli, who was named to Adweek’s “11 Celebrities and Influencers Raising the Bar for Creativity in 2017,” is also an accomplished writer and speaker on the topics of space exploration, scientific literacy, and equality. Her chapter book series, “The Ada Lace Adventures,” centers around an eight-year-old girl with a knack for science, math, and solving mysteries with technology. The second book in the series, “Ada Lace: Sees Red,” was included in the National Science Teachers Association’s list of best STEM books for 2018. The third book, “Ada Lace: Take Me To Your Leader,” was part of the initiative from NASA and CASIS, Story Time from Space, where the book was launched into space and read by an astronaut aboard the ISS to an audience of kids. The fifth and most recent book in the series, “Ada Lace: and the Suspicious Artist” which was released in February 2019.She frequently gives talks about the importance of science literacy, the benefits of space exploration, and the challenges for women in STEM careers for clients like Google, Pixar, MIT, Texas Instruments as well as dozens of K-12 schools across the nation. Her first two TEDx talks, “I Don’t Do Math” and “Space Exploration Is The Worst,” have garnered over one million views on YouTube.Prior to her work in science communication, Calandrelli attended West Virginia University, where she received a Bachelors of Science degrees in Mechanical Engineering and Aerospace Engineering, and MIT where she received two Masters of Science degrees, one in Aeronautics and Astronautics and the other in Technology and Policy. Through her work, she wants to make science relatable, easy to understand and more exciting today than ever before in history.Contact a speaker booking agent to check availability on Emily Calandrelli and other top speakers and celebrities.