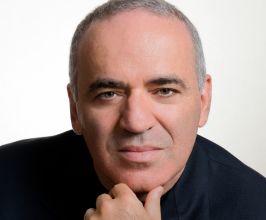 Book Garry Kasparov for your event

Born in Baku, Azerbaijan, in the Soviet Union in 1963, Garry Kasparov became the under-18 chess champion of the USSR at the age of 12 and the world under-20 champion at 17. He came to international fame at the age of 22 as the youngest world chess champion in history in 1985. He defended his title five times, including a legendary series of matches against arch-rival Anatoly Karpov.Kasparov’s famous matches against the IBM super-computer Deep Blue in 1996-97 were key to bringing artificial intelligence, and chess, into the mainstream. They also sparked Kasparov’s passionate interest in the human relationship with our increasingly intelligent machines, a theme he has investigated for decades beginning with the invention of “Advanced Chess” in 1998. His vision for the importance of processes that dynamically combine the best of human and machine intelligence has become influential across the financial and tech sectors.Kasparov was one of the first prominent Soviets to call for democratic and market reforms and was an early supporter of Boris Yeltsin’s push to break up the Soviet Union. In 1990, he and his family escaped ethnic violence in his native Baku as the USSR collapsed. In 2005, Kasparov, in his 20th year as the world’s top-rated player, retired from professional chess to join the vanguard of the Russian prodemocracy movement. In 2012, Kasparov was named chairman of the New York-based Human Rights Foundation, succeeding Václav Havel. HRF promotes individual liberty worldwide and organizes the annual Oslo Freedom Forum. Facing imminent arrest during Putin’s crackdown, Kasparov moved from Moscow to New York City in 2013.Since 1990, Kasparov has been a regular contributor on politics to many major publications, including The Wall Street Journal, The Washington Post, and The New York Daily News. His Twitter and Facebook boast over three-quarter million followers. Kasparov speaks frequently to business audiences around the world on strategy, decision-making, and artificial intelligence. In 2016, he was named a Security Ambassador by Avast Software, where he discusses cybersecurity and the digital future, and to the executive board of the Foundation for Responsible Robotics.In 2017, Kasparov founded the Renew Democracy Initiative, dedicated to promoting the principles of the free world. Bringing together prominent figures on the left and the right, the non-partisan RDI has launched programs to support civics education, integrity in public office, and the vital importance of engaged citizenry. The US-based Kasparov Chess Foundation non-profit promotes the teaching of chess in education systems around the world. Its program already in use in schools across the United States, KCF also has centers in Brussels, Singapore, and Mexico City.Kasparov’s book How Life Imitates Chess on strategy and decision-making is available in over 20 languages. He is the author of two acclaimed series of chess books, My Great Predecessors and Modern Chess. Kasparov’s prescient 2015 book, Winter Is Coming: Why Vladimir Putin and the Enemies of the Free World Must Be Stopped, is a blend of history, memoire, and analysis of the threats to the modern world order.Kasparov’s latest book is Deep Thinking: Where Machine Intelligence Ends and Human Creativity Begins (2017). It reveals the full story of his matches against Deep Blue and his optimistic and pragmatic analysis of our future with intelligent machines. He says, “The combination of human plus machine is the only way to map the world of uncertainty and achieve our greatest dreams. That’s why I prefer to call AI “augmented intelligence.” It’s a tool that makes us smarter, that extends our minds the way a telescope extends our eyes. We just have to point it in the right direction, and that’s where human creativity and strategic planning come in.”Contact a speaker booking agent to check availability on Garry Kasparov and other top speakers and celebrities.