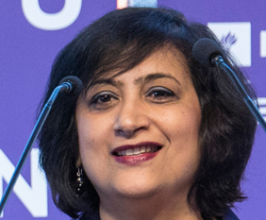 Book Geeta Menon for your event

Geeta Menon is the 11th Dean of the Undergraduate College at NYU’s Leonard N. Stern School of Business. She is also the Abraham Krasnoff Professor of Global Business and Professor of Marketing. Since 1990, she has been a member of Stern’s Marketing faculty where she served as Department Chair from 2004 to 2008. She was also the 11th Dean of the Undergraduate College for eight years (2011-2019). In 2015, she was named one of the 20 most influential global Indian women in business and the arts by The Economic Times.Menon is a respected educator and a prominent scholar. She has taught the core marketing class at the graduate and undergraduate levels, as well as electives such as marketing research and consumer behavior. She is also actively involved in Ph.D. education, and has mentored many doctoral students who have gone on to institutions such as the University of Chicago, Cornell University, Dartmouth University, Northwestern University, and the University of Southern California. She is the recipient of the Citibank Award for excellence in teaching at NYU Stern.As a researcher, Menon is known for her study of consumer memory, information processing and emotions in the contexts of survey methodology, advertising of health information and risk perception. Her work has been published in leading journals such as the Journal of Consumer Research, Journal of Marketing Research and Organizational Behavior and Human Decision Processes, and has been funded by the National Institutes of Health and the American Diabetes Association. Menon held several professional leadership roles as an active member of the marketing research community. She is the past President of the Association for Consumer Research (ACR), served on the ACR Board of Directors as Treasurer, and was co-chair of the 2004 annual ACR conference. She also recently served as the Associate Editor of two premier marketing journals: the Journal of Consumer Research and the Journal of Marketing Research. In addition, she is on the advisory panel of the Journal of Consumer Psychology and on the editorial board of Journal of Public Policy and Marketing.As dean, she propelled the NYU Stern Undergraduate College upward to its current stature of top-ranked in the world. Applications increased by 80% during her tenure, the selectivity was at single-digits for the first time ever, and the admissions yield rate increased to record levels. She advanced the undergraduate curriculum with innovations like the Stern Program for Undergraduate Research (SPUR) engaging over 120 faculty members and 600 undergraduate students to collaborate on research. She oversaw the creation of the NYU Stern undergraduate Office of Student Engagement (OSE), and the College enjoyed 98% summer internships in the junior year, a strong 98% placement rate within six months of graduation, and one of the highest entry-level salaries among undergraduate business programs. Relying on her background, she prioritized brand building and promoting student pride, and this was reflected in student satisfaction surveys over the last seven years, and the popularity of the #IAmStern/#WeAreStern campaign on social media. Menon, who reported directly to the President of NYU, was a member of NYU’s Senior Leadership Team, and served on several university committees addressing issues of affordability, judiciary and curriculum.Prior to her deanship, Menon has held appointments at leading business institutions, including the Laura and John J. Pomerantz Professor of Marketing at the Wharton School (2008-2010), Visiting Professor at the Indian School of Business (2009, 2011), and Visiting Scholar at Stanford (Fall 2000) and the Indian Institute of Management-Bangalore (Spring 2000). She received her Ph.D. in Business Administration from the University of Illinois at Urbana-Champaign.Contact a speaker booking agent to check availability on Geeta Menon and other top speakers and celebrities.