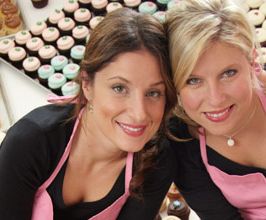 Book Georgetown Cupcake for your event

Sisters Katherine Kallinis Berman and Sophie Kallinis LaMontagne are the co-founders of Georgetown Cupcake, stars of the hit series DC Cupcakes on TLC, and best-selling authors of The Cupcake Diaries: Recipes and Memories from the Sisters of Georgetown Cupcake. Their new book, Sweet Celebrations: Our Favorite Cupcake Recipes, Memories, and Decorating Secrets that Add Sparkle to any Occasion comes out in the Fall, 2012.Inspired by their grandmother, in 2008, Katherine and Sophie traded careers in fashion and venture capital to follow their passion for baking and opened Georgetown Cupcake in Washington, DC. Since 2008, Katherine and Sophie have expanded Georgetown Cupcake with locations in Bethesda, MD, New York City/SoHo, and Boston/Newbury St. with an additional location planned for Los Angeles (Fall 2012). Georgetown Cupcake ships its cupcakes nationwide and currently employs over 400 employees.Sophie and Katherine and their cupcakes have been featured in, among other media outlets, The New York Times, The Wall Street Journal, USA Today, The Washington Post, Better Homes and Gardens, Marie Claire, Food & Wine, TV Guide, the Today Show, The Martha Stewart Show, The Oprah Winfrey Show, Live! With Kelly, CBS News, Access Hollywood, Extra, Entertainment Tonight, The Talk, People, InStyle, Town & Country, US Weekly, Redbook, Teen Vogue, Cosmopolitan and In Touch Weekly.Contact a speaker booking agent to check availability on Georgetown Cupcake and other top speakers and celebrities.