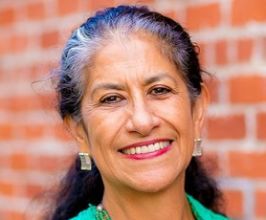 Book Maria Echaveste for your event

Maria Echaveste is the President and CEO of the Opportunity Institute, where she oversees executive and administrative duties, including day- to-day activities, development, and budgets, and directs programmatic work. She has built a distinguished career working as a consultant, lecturer, senior White House official, long-time community leader, and corporate attorney.Echaveste has been affiliated with UC Berkeley in various capacities since 2004 including: lecturing at the School of Law and in the undergraduate division on immigration and education; serving as program and policy director of the Law School’s Chief Justice Earl Warren Institute on Law and Social Policy from 2008 -2012; as a Senior Fellow at UC Berkeley’s Center for Latin American Studies since 2008; and with the Berkeley Food Institute, focused on transforming our nation’s food system.Prior to co-founding the D.C.-based strategic and policy consulting group NVG, LLC, in 2002, Echaveste served as Assistant to the President and Deputy White House Chief of Staff for President Clinton from 1998 to 2001. In that position, in addition to general White House management, she focused on several policy and political issues, including immigration, civil rights, education, finance, Mexico, and Latin America. She also served as Administrator of the Wage and Hour Division at the U.S. Department of Labor from 1993 to 1997.In 2009, then-Secretary of State Hillary Clinton appointed her as a special representative to Bolivia. Echaveste later served on the board of the U.S.-Mexico Foundation, where she initially focused on the foundation’s Mexican-American Leadership Initiative launched in 2010. 2010. In 2013, President Obama nominated her to be ambassador to Mexico; she withdrew eight months later having been denied a confirmation hearing.Currently, Echaveste serves on the board of directors of UCSF-Benioff Oakland Children’s Hospital, Mi Familia Vota, and Level Playing Field Institute.Echaveste received a B.A. in anthropology from Stanford University in 1976, and a J.D. from U.C. Berkeley in 1980.Contact a speaker booking agent to check availability on Maria Echaveste and other top speakers and celebrities.