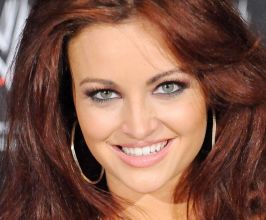 Book Maria Kanellis for your event

Maria Kanellis is an actress, singer, TV hostess/personality, former WWE Diva and aspiring fashion designer. She is currently appearing on “The Celebrity Apprentice” on NBC. She is releasing her first music album, a 4 song EP, on April 13th, 2010. She is most well-known as a former professional wrestler and personality within World Wrestling Entertainment (WWE) for the past 5 years.Maria Louise Kanellis was born on February 25, 1982 in Ottawa, Illinois. The oldest of three siblings she grew up surrounded by cars and her free time was spent juggling sports, pageants and dancing. In 2004 Maria made her first of many television appearances when she was a contestant on the reality series Outback Jack. Soon after she tried out for the WWE Diva Search and placed fifth out of thousands of contestants. Although she was eliminated, Maria was later hired by WWE as a backstage interviewer on Monday Night Raw and began training for the next 3 years at the Ohio Valley Wrestling facility. She began competing in the ring as a wrestler in 2005. After her debut Maria worked alongside the company’s biggest superstars including John Cena, Dwayne “The Rock” Johnson, and “Stone Cold” Steve Austin. Maria never shied away from angles or story lines and is most comfortable in the spotlight. She posed for the April 2008 cover and pictorial in Playboy magazine, which WWE incorporated into one of the year’s most popular story-lines on Monday Night Raw. For the Playboy shoot, Maria chose several elements, including lighting, wardrobe and style. She even designed and produced some of her own wardrobe for this “high-fashion” themed layout. She has also created outfits for her wrestling matches, television appearances, red carpet charity events and high profile WWE ceremonies.Maria enjoyed some cross-over success while with the WWE, making several TV appearances. She has co-hosted G4 Network’s “Attack of the Show” and she lists “Deal or No Deal,” “Family Feud,” “Project Runway,” “VH1’s Top 20 Video Countdown,” “The Insider,” “Best Damn Sports Show,” “Red Eye,” and “The Today Show,” among several television appearances on her resume. In March 2010, she will appear as a cast member of NBC’s hit series “The Celebrity Apprentice” alongside fellow contestants Sharon Osbourne, Brett Michaels, and Cindy Lauper to name a few. Maria worked with the Make-A-Wish Foundation as her charity of choice during filming. She is very active when it comes to other charitable organizations, such as Generation Rescue, Paws For Style, St. Jude’s Children Hospital and The Kentucky Humane Society to name a few. Philanthropy holds a special place with Maria as she continually donates her time and money towards newfound, worthy causes. She has traveled overseas with the WWE from 2005-2008 for it’s annual USO Tribute to the Troops Tour, donating her time and energy to entertain and spread goodwill to our servicemen and women stationed overseas.Maria was recently named WWE’s Diva of the Year for 2009, a popular fan vote as decided by the WWE Universe. Shortly after she was released unexpectedly by the WWE, citing Maria’s deep desire to pursue outside interests, such as TV, movies, and writing and producing her own music. Maria describes her rock music as a combination of glamour, twisted lyrics and sex appeal. The first EP is titled “Sevin Sins.”Maria has only began her rise to stardom but already has millions of fans worldwide and an intense drive for success. Her creativity is evident in everything she does. Maria’s life mantra that inspires her is “Passion is my Motivation.”Contact a speaker booking agent to check availability on Maria Kanellis and other top speakers and celebrities.