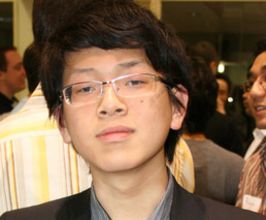 Mark Bao (formerly Steven Bao) is a 17-year-old technology entrepreneur and non-profit founder and advocate, based in Boston, Massachusetts, USA.

Book Mark Bao for your event

Mark Bao (formerly Steven Bao) is a 17-year-old technology entrepreneur and non-profit founder and advocate, based in Boston, Massachusetts, USA. He is a Chinese immigrant, born in Harbin, Heilongjiang, China, in 1992.He has been starting businesses since 2006. Since then, he has started 11 properties in the web and technology sector.Mark is primarily working as President & CEO at Avecora. Avecora is building next-generation mobile devices, as well as Avecora Network, the ubiquitous technology network. Its central idea is The Avecora Vision: to integrate all technology with one another, as well as with the social graph.Recently, he is the co-founder of Ramamia, a utility that helps you keep in touch with your family via simple and private sharing of photos, messages, events, and websites, with birthday reminders, comments, and more.As a non-profit founder and advocate, in 2009 he founded The Ramamia Foundation, an organization sponsored by Ramamia aiming to fight homelessness and poverty, and promote family and community values.A nonprofit he has recently founded is EveryoneGive, a 501(c)(3) registered nonprofit that aims to crowdsource small business funding.In the past, he’s spoken at Gnomedex 2008, and organized the Facebook Developer meetups in Boston, as well as the Facebook Developer Garage Boston.Mark is inspired by technology, innovation, virtual reality, and the integration of devices with each other and the social layer.Contact a speaker booking agent to check availability on Mark Bao and other top speakers and celebrities.