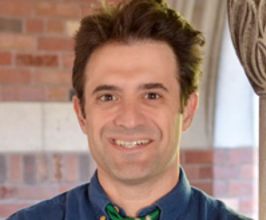 Book Mark Oppenheimer for your event

Mark Oppenheimer may hold a Ph.D. in religion from Yale, and has taught at Yale, Stanford and NYU, but he is most proud to be the only writer ever to contribute to both The Christian Century magazine and Playboy. Oppenheimer has always been interested in the wilder side of religion in America. In his beloved “Beliefs” column for The New York Times, on NPR, at the Aspen Ideas Festival and in major magazines, Oppenheimer brings to millions of readers unusual reports from the worlds of Shakers and Scientologists, Mormons and Muslims, and beyond.As a journalist, public speaker and humorist, Oppenheimer is broadly interested in everything that promotes community, including religion but also walkable, close-knit neighborhoods and intact, resilient families, even those that take non-traditional forms. He considers his three great roles in life to be religion writer, neighborhood dweller and dad — all of which give him unending topics to write about, and a never-ending stream of stories to laugh about.Oppenheimer is the author of two cutting-edge studies of religion and popular culture. The first, Knocking on Heaven’s Door, describes how the tumult of the 1960s affected Protestants, Catholics and Jews in America. The second, Thirteen and a Day, tells the story of Oppenheimer’s cross-country trip in search of unique bar and bat mitzvahs, from the Ozark Mountains to rural Louisiana to Alaska. His essay “40 Thoughts on a Fourth Daughter” won an honorable mention from Best American Essays 2014, and his parenting column, “Fatherland,” appears monthly in The New Republic. In his column, he has discussed such issues as how much television children should watch and the crazy fights over immunizing children.Oppenheimer is deeply interested in how religious rituals help form and promote close-knit communities. He has written about how to overcome the intimidation factor when learning to pray for the first time, and about how weekly church or synagogue attendance can be fun for families. Even while writing for national magazines and working on his fourth book, Oppenheimer takes the time to investigate how people make tough choices — whether adults working in business, medicine, or other professions, or young people from their teen years to their thirties. He has delivered his humorous, accessible, intellectual speeches at colleges, high schools, churches, synagogues and civic group meetings across the country.Contact a speaker booking agent to check availability on Mark Oppenheimer and other top speakers and celebrities.