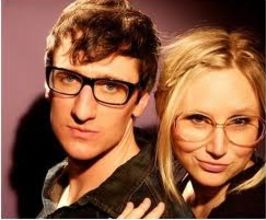 Mates of State is the organ and drums.

Book Mates of State for your event

Mates of State is the organ and drums, vocal-laden duo of Kori Gardner and Jason Hammel. Formed in the nation’s heartland in December of 1997, their infectious songs and long-standing motto of play anywhere, anytime has earned them a legion of fans from coast to coast and everywhere else in between.After years of playing in countless bands (nearly twenty between the two of them), Kori and Jason finally realized the ease of playing with only one other person. Ditching their guitars for just an organ and drum set, the trick now was getting two people to sound like a full band. With the two instruments, they added call and response vocal melodies and harmonies to create a sound unique in its immenseness. An open-mic was scheduled and tensions ran high as they began to question their untraditional arrangement. Afterwards, they realized it didn’t matter.Mates of State played about six times in Lawrence, Kansas before packing it in and driving to California in August 1998 where the band would release “Leave Me at the Tree” with Fighter D as a split 7″ on Omnibus Records. After eight months in the suburbs, the band moved to San Francisco proper and Omnibus released two additional songs, “It’s the Law” and “Invitation Inn,” as a separate 7″. Mates of State spent 1999 touring throughout the West Coast, playing consistently in California and solidifying their position in San Francisco’s burgeoning pop scene.In April of 2000, the band chanced upon engineer John Croslin (Beulah, Spoon, Guided By Voices) whose reserved but confident knowledge immediately attracted the band. The same day, Mates of State scheduled studio time. The Croslin sessions resulted in their debut album My Solo Project, 12 tracks of unconventional pop appeal. Instantly, critical acclaim poured forth from fanzines, periodicals, and dailies such as the San Francisco Bay Guardian and New York Times (who included the album in their “10 worthwhile albums you may have missed in 2000″). A Midwest tour with longtime friends The Appleseed Cast was quickly put together and followed by yet another string of shows up and down the West Coast.July 2001 saw Mates of State signing with Polyvinyl Records, and a month later they re-entered the studio to record their second album, this time with engineer Dave Trumfio (Butterglory, Dianogah, Wilco) behind the board. The band closed out the year by landing large tours alongside Beulah and Mars Volta. Their second full-length, Our Constant Concern, was released in January 2002.Mates of State greeted 2003 with two new releases. The first was a split 7” with longtime friends Dear Nora which featured Mates’ haunting rendition of Jackson Browne’s “These Days.” The latter was their next full-length, Team Boo, which was released September 2003.On their third album, Team Boo, the band discovered the perfect studio environment for their unique blend of vintage Yamaha organ, Gretch Round Badge drums, off-kilter harmonies, and the dynamism that holds it all together. The album was recorded and mixed over three weeks at both The Garage and Willie Nelson’s Pedernales studios. Manning the knobs were John Croslin (My Solo Project) and Spoon’s Jim Eno. Incredibly infectious, Team Boo was immediately embraced by college radio as the band toured with friends Victory at Sea, The Thermals, and Death Cab for Cutie.In November of 2004, Mates of State released the All Day EP and Two Of Us, a behind-the-scenes DVD documentary. Four tracks of spunky organ and drums, All Day includes the delightful “Goods” and a cover of the David Bowie classic “Starman.” (In 2009, Polyvinyl Records released the EP on vinyl for the first time). Meanwhile, Two Of Us is a captivating look at Mates of State, providing rare, behind-the-scenes insight, home videos, concert footage and an intimate portrayal of the making of Team Boo. Recorded over a two year period, the DVD provides an accurate portrayal of a band already on the rise.In late 2005, Mates of State made the move to Barsuk Records for the release of their fourth full-length Bring It Back. While Barsuk released the CD version of the album, Polyvinyl still contributed in the release of a vinyl edition. Filled with undeniable hooks and lush, layered tones, Bring It Back showcases Mates of State at their finest – inconceivably catchy and playful.2008’s Re-arrange Us brought a different side of Mates of State to the forefront. Abandoning the organ-fueled tracks for a more piano/synth edge, Re-arrange Us features a growth in sound as evidenced by the emphasis on both Kori and Jason as individual artists. Contact a speaker booking agent to check availability on Mates of State and other top speakers and celebrities.