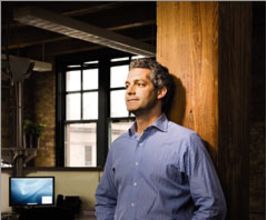 Book Matt Moog for your event

Matt Moog is the Founder & CEO of PowerReviews, a leading provider of consumer product reviews and the founder and chairman of BuiltInChicago.org an online community for digital technology entrepreneurs in Chicago. Prior to founding PowerReviews, Matt spent ten years at CoolSavings. He joined CoolSavings as the fifth employees in 1996 as the VP of Sales.In 1998 he was promoted to EVP of Sales and marketing and then in 2001 to President & CEO. In this capacity he led a turnaround that resulted in revenue growing from $21 million to $80 million over five years. In 2005 he led a transaction that took the company private at a valuation of $220 million.Matt Moog is the CEO of PowerReviews, a leading provider of customer review technology to more than 1,000 brands and retailers.Previously Matt founded Viewpoints, the predecessor to PowerReviews, Built In, a growing network of online communities for digital technology entrepreneurs and Wavetable Labs a digital business incubator.Matt is also an active angel investor. He co-founded the FireStarter Fund in January 2012 with Brian Hand, Troy Henikoff, Sam Yagan and 40 other Chicago based technology entrepreneurs. Since launch FireStarter Fund has made twelve investments including Retrofit, GiveForward, Kapow, Shiftgig, Cartavi (acquired by Docusign), Upcity, Hireology, Tap.me (acquired by MediaMath), Food Genius, Mighty Nest, Blitsy and Pangea Payments.Previously Matt served as the President & CEO of CoolSavings a publicly traded marketing services company that was founded in 1996, went public in 2000 and was taken private in 2005 at a valuation of $220 million.Prior to CoolSavings, Matt worked for Microsoft for five years in business development helping to launch MSN in 1995.Currently Matt serves as the Vice Chair of Chicago Public Media, the Vice Chair of YPO Chicago, and as a board member of Francis Parker School, and of publicly traded VASCO Data Security.Matt has previously served as an executive board member of the Word of Mouth Marketing Association, on the board of the Direct Marketing Association (DMA) 2005/06 and the Interactive Advertising Bureau (IAB) 2004-2006.Matt was named to Crain’s Tech 25 in 2011, 12 and 13 and to Crain’s 40 under 40 in 2005. He has been nominated for the Ernst & Young Entrepreneur of the Year Award for both CoolSavings and Viewpoints. Matt has been cited as an industry expert in The New York Times, The Wall Street Journal, The Chicago Tribune, Fortune Small Business, and a variety of other national and regional publications. He has also appeared on Fox News, CNN, CNBC, WGN, CBS 2 Chicago and WTTW to discuss the future of digital media.Matt holds a BA in Political Science from the George Washington University (’92). Matt is married, to Lucy, with three boys Max , Charlie, and Eli.Contact a speaker booking agent to check availability on Matt Moog and other top speakers and celebrities.