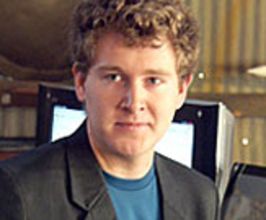 Book Max Geiger for your event

Game designer Max Geiger says his strategy for innovation is simple: he always bites off more than he can chew. He says it’s the best way to find opportunity—try new things, look for unusual syntheses, be open to as many different things as possible.In fact, the more information, the better. As part of the first generation that grew up on the Internet, Geiger embraces the positive potential of media convergence, transparency and intellectual surplus. “It’s how we exist,” he says. “We’re immersed in the constant awareness of things that are going on around us.” The important thing, he says, is to “parse through” all of the information to find the good stuff.The high-tech nature of Geiger’s profession may obscure the humanist behind the game designer, but he always looks for good in what he does. While studying game development as an undergraduate at the University of Southern California, Geiger was also trained in the classics. He says that contemplating the origins of western thought instilled in him a desire to ask the deeper questions in life: What does it mean to be a good person? What is the essential core of a human person?At first glance, Geiger’s day job may seem to move far away from such philosophical musings. As the simulations consultant for Spike TV’s new show ‘Deadliest Warrior,’ he spends his time simulating battles between warrior figures from all of history. Each episode of the show attempts to settle an important debate: Who would win in a battle to the death—a Viking or a Samurai warrior? An Apache or a gladiator? Which weapon is deadlier—a Spartan shield or a baseball bat?Geiger, who also co-hosts the show, gathers data (collected by Biomedical Engineer Geoff Desmoulin) about historic warriors and feeds it into his simulation software. Meanwhile, weapons experts try out various armaments on dummies and dead animals in a warehouse. Emergency room physician Armand Dorian describes the extent of the damage. Geiger gathers all the data, simulates a thousand battles to determine which warrior is most likely to win, and the filming begins. When viewers tune in to Spike TV, they are watching actors dramatize the results of Geiger’s computer simulation.The “carnage testing” on the set of “The Deadliest Warrior” occasionally takes its toll, he says. He describes the filming as “tremendously violent” and struggles at times to turn it into something abstract. But he says he gets “creative information out of destruction.”For one thing, Geiger has discovered that we have firm ideas about who our heroes and enemies are and why they win or lose. He says we have a “great urge to put things in their proper pigeon holes,” but that “play” is the perfect state of mind to break down those rigid categories that limit our experience.“I try to embrace a playful attitude toward many things I approach,” he says. “On ‘Deadliest Warrior,’ the play is doing all these tests. The structure that underlies all that and transforms it is the fact that science has to get done—questions have to be answered.”While play and science on “Deadliest Warrior” point toward mathematically engineered outcomes, the show also leaves a lingering knowledge that physical skill and lethal weaponry are not always the determining factors in battle. Ingenuity, on-the-spot thinking and practical resourcefulness on the part of the warriors cannot be simulated on a computer, but they are essential components of any victory.“The more enduring heroes are not the ones for whom might meant right,” Geiger says. “There is always an element of wit or cleverness. Who can adapt the fastest and shift the paradigm? Who can change things the most?”Geiger says Deadliest Warrior’s most difficult episode to produce pitted the I.R.A. against the Taliban. Unlike other episodes, the comfortable distance of history was lost. Testing improvised explosive devices that are used today had an emotional impact on both the set crew and on the audience.“We realized we would be showing this to an audience who would actually know about these devices, but wouldn’t have seen them,” Geiger says. “By presenting it through our scientific means, we get a bit of information to our audiences that they wouldn’t normally be receptive to.” After the “I.R.A. vs. Taliban” episode, the show’s producers made a pitch to viewers about the United Nation’s Adopt-a-Minefield campaign for global landmine clearance. The response was strong.So, in the end, Geiger’s humanism wins out. This crazy, over-the-top television show that stages imaginary fights between mythic warriors from all of human history has actually made a difference for good. What rises above the technology and the most brutal instincts of our human nature, he says, is that people are very good at thinking and coming up with solutions.“The real beauty of the human mind comes from approaching things from the unexpected directions,” he says.Contact a speaker booking agent to check availability on Max Geiger and other top speakers and celebrities.