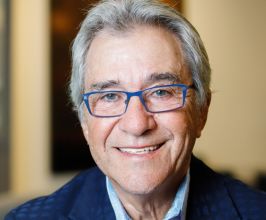 After a successful 19-year career in the clothing business, Michael Coles tested his entrepreneurial skills in 1977, when he co-founded Great American Cookie Company with a joint investment of only $8,000. Shortly after starting the company, he was involved in a near-fatal motorcycle accident and was told by doctors he would never walk again unaided. As Coles recovered through a self-designed rehabilitation program, he took the company from its first store in Perimeter Mall in Atlanta to hundreds of stores nationwide and, at the same time, set three coast-to-coast bicycling records.When he started the Great American Cookie Company, there were three major cookie companies in business. One had almost 100 stores and the other two had 50 each. When he sold the company in 1998 with sales over $100 million, the Great American Cookie Company was the largest franchisor of cookie stores and the other three companies no longer existed.Coles’ commitment to community service led him to run for public office in 1996 as the democratic nominee for the House of Representatives in the Sixth District of Georgia, and in 1998 he won the democratic nomination for U.S. Senate, challenging Senator Paul Coverdell.In 2003, Coles accepted the corporate reins of Caribou Coffee Company as chairman, CEO and president. Over the next five years, Coles more than doubled the size of the company, extending the brand reach domestically and abroad. In September 2005, he successfully took the company public on NASDAQ under the symbol CBOU.Coles went on to join others in founding Charter Bank & Trust and served as its chairman, taking the bank public and selling the publicly traded company to Synovus Bank.Coles is also the former chairman of Brand Holding Company and chairman of Brand Bank.Appointed by Governor Roy Barnes in 1999 to chair the Georgia Film, Video and Music Advisory Board, during his four years as chairman, Coles and his board successfully passed HB610, which was the first-ever tax incentive of its kind in Georgia. That bill allowed the film industry to begin a rebirth, going from $170 million in 1999 to over $1.5 billion in economic impact by 2003. Today, Georgia’s film industry generates over $9.5 billion.Having contributed much of their time and resources to education, the arts, environment and philanthropic organizations, Coles and his wife, Donna were honored as the Georgia Philanthropists of the Year in 1995.Coles was appointed by Governor Roy Barnes in 2001 to serve on the Board of Regents of the University System of Georgia.In recognition of Coles’ success, leadership and benevolence, Kennesaw State University, under the authority granted by the Board of Regents of the University System of Georgia, declared that the institution’s School of Business be named and known in perpetuity as the Michael J. Coles College of Business at Kennesaw State University. In 1999, Michael received the Honorary Doctor of Humane Letters Degree from Kennesaw State University.As Entrepreneur in Residence for the Coles MBA 2013 Spring Semester, Coles led a class entitled “Concept to Counter,” allowing students to grasp the concept of taking their creative thoughts and ideas to the marketplace.Coles received the National Women’s Political Caucus “Good Guy of the Year” Award for his work on behalf of women’s issues. He joined the ranks of past recipients, including Ed Asner, Alan Alda and former Vice President and U.S. Ambassador to Japan, Walter Mondale.On October 17, 2018 Coles officially launched his new book titled “Time to Get Tough: How Cookies Coffee and a Crash Led To Success in Business and Life.”Coles continues to serve on numerous non-profit boards and delivers keynotes to students, organizations and at corporate events across the country. He is a member of The Jackson Hole Rotary Club.Coles lives in Jackson Hole, Wyoming with his wife Donna and they are the parents of three adult children and seven grandchildren.Contact a speaker booking agent to check availability on Michael J. Coles and other top speakers and celebrities.