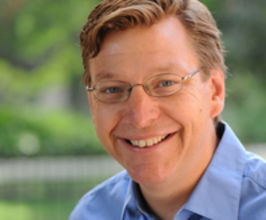 Copernicus. Galileo. Hubble, Halley, Sagan. And now, Brown. Like the scientific luminaries before him, Mike Brown has forever changed the way we view the final frontier. Specializing in the discovery and study of bodies at the edge of the solar system, Mike Brown and his teams discovery of Eris, which is larger than the former ninth planet, led to demotion of Pluto to dwarf planet. At the podium, Brown tells the fascinating true story of the demise of Pluto and a first-hand account of the modern day discoveries of our solar system.Mike Brown is a professor of planetary astronomy at the California Institute of Technology. In 2006, his and his teams work rocked the world when, inspired their findings, the International Astronomical Union (the organization which oversees astronomical rules and conventions) revised the definition of a planet. The result was that Pluto was deemed too small and ousted from the official planetary list.Brown and his teams discoveries of several bodies of similar size to Pluto, including Eris, Quaoar and Sedna, known as dwarf planets, has permanently changed the way we look at our Solar System. Feature articles about Brown and his and his teams work have appeared in the New Yorker, the New York Times, and Discover, among many other major publications, and his discoveries have been covered on front pages of countless newspapers worldwide. In 2006 he was named one of Time magazine’s 100 Most Influential People as well as one of Los Angeles magazine’s Most Powerful Angelinos. He has authored nearly 100 scientific papers, and his writing has appeared in numerous academic, scientific, and popular publications including the New York Times, Physics Today, and the World Book Science Year.Mike Brown received his AB from Princeton in 1987 and his MA and PhD from University of California, Berkeley, in 1990 and 1994, respectively. He has won numerous awards and honors for his scholarship, including the prestigious Urey Prize for best young planetary scientist from the American Astronomical Society’s Division of Planetary Sciences; the prestigious Richard P. Feynman Award for Outstanding Teaching at Caltech; a Presidential Early Career Award; a Sloan Fellowship; and, of course, the one that started his career, an honorable mention in his fifth-grade science fair. He was also named one of Wired On-line’s Top Ten Sexiest Geeks in 2006. Mike Brown is the subject of the childrens book, The Planet Hunter: The Story Behind What Happened to Pluto. He lives with his wife and daughter in Southern California.Contact a speaker booking agent to check availability on Mike Brown Ph.D. and other top speakers and celebrities.