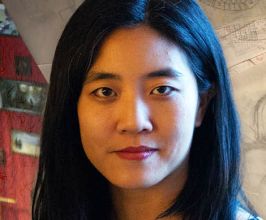 Book Mimi Lien for your event

Mimi Lien is a designer of sets/environments for theater, dance, and opera. Arriving at set design from a background in architecture, her work often focuses on the interaction between audience/environment and object/performer. She hails from New Haven, CT and is based in Brooklyn, NY.She was recently named a 2015 MacArthur Fellow, and is the first set designer ever to achieve this distinction. Selected work includes Natasha, Pierre, & The Great Comet of 1812, John, Appropriate, Preludes, The Oldest Boy, An Octoroon, Black Mountain Songs.Her stage designs have been exhibited in the Prague Quadrennial in 2011 and 2015, and her sculptures were featured in the exhibition, LANDSCAPES OF QUARANTINE, at the Storefront for Art and Architecture.Her designs for theater, dance, and opera have been seen around the U.S. at such venues as Lincoln Center Theater, Signature Theatre, Playwright’s Horizons, the Public Theater, Berkeley Repertory Theatre, The Joyce Theater, Goodman Theatre, Soho Rep, and internationally at Perm Opera and Ballet Theatre (Russia), Intradans (Netherlands), National Theatre (Taiwan), among many others. Mimi Lien received a B.A. in Architecture from Yale University and an M.F.A. in Stage Design from New York University.In 2017 she won the Tony Award for Best Scenic Design in a Musical for Natasha, Pierre, & The Great Comet of 1812.Contact a speaker booking agent to check availability on Mimi Lien and other top speakers and celebrities.