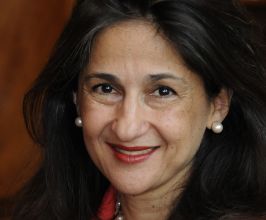 Book Minouche Shafik for your event

In 2008, Minouche was appointed Permanent Secretary of DFID after having served as Director General Country Programmes and assumed responsibility for all DFID country programmes in Africa, Asia, Eastern Europe, Latin America and the Middle East since 2004. She was responsible for an annual budget of £ 2.7 billion, and more than 1 800 personnel in over 50 countries.She was previously Vice-President for Private Sector Development and Infrastructure at the World Bank and was part of the group of executives from the International Finance Corporation (IFC). She also chaired several international consultative groups that specialise in the areas of microfinance, energy, water and sanitation for the poor, urban development and slum upgrading, information technology applied to development and private participation in infrastructure development.Her duties at the World Bank have enabled her to gain experience in many different areas – the Middle East, Eastern Europe and environmental and international economic issues. She has also taught at the Wharton School of Management Business School and Georgetown University.Minouche holds a Bachelor of Economics and Policy from the University of Massachusetts-Amherst and an MA in economics from the London School of Economics (Faculty of Economics, London). She also holds a PhD (Economics) from St. Antony’s College, University of Oxford.DFID is the Government Department of the United Kingdom responsible for the management of aid provided by Britain to poor countries. It works for the eradication of extreme poverty around the world. DFID is headed by a member of the Cabinet, a senior Minister of the British Government. It is represented by 64 offices abroad and employs over 2 500 staff of which nearly half work abroad.Some details on the work of Minouche:“From Architecture to Networks: The Changing World of Aid,” mimeograph, Department for International Development, December 2007“Infrastructure Service in Developing Countries: Access, Quality, Costs and Policy Reform,” (with Cecilia Briceno-Garmendia and Antonio Estache), World Bank Policy Research Paper 3468, December 2004.Prospects for the Middle East and North African Economies: from Boom to Bust and Back?, (editor), London: Macmillan, 1998.Challenges Facing Middle Eastern and North African Countries: Alternative Futures (editor), London: Macmillan, 1998.Globalization, Regionalism and Growth: Economic Prospects for the Middle East and North Africa, International Forum Series, Fondazione Giovanni Agnelli, Torino, Italy, 1996.“Selling Privatization Politically,” mimeograph, Wharton School, University of Pennsylvania, Philadelphia, April 1996.Claiming the Future: Choosing Prosperity in the Middle East and North Africa, (lead author), Washington, D.C.: World Bank, 1995 (in English, French, Arabic and Japanese).Reviving Private Investment in Developing Countries, (with Ajay Chhibber and Mansoor Dailami), Amsterdam: North-Holland, 1992.“Economic Growth and Environmental Quality: Time Series and Cross-Country Evidence” Policy Research Working Paper, World Bank, 1992.Minouche’s word :Participating to the blog Ideas4Development is for my colleagues and myself a real gift, to the extent that we apprehend it as a useful space: a space to take a step back and reflect on issues whose details challenge us daily. It is a special opportunity to hear the views of various professionals and participants and to share our ideas with a group of critics much wider and thus stimulate and engage a real debate on issues that are among the greatest concern of our time.Contact a speaker booking agent to check availability on Minouche Shafik and other top speakers and celebrities.