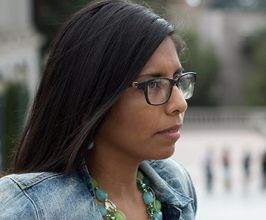 Book Natalia Anciso for your event

Natalia Anciso is a Chicana-Tejana visual artist and educator. Anciso was born in Weslaco and raised in Mercedes, hardscrabble towns in the Lower Rio Grande Valley of Deep South Texas. Shortly after her birth, Anciso’s family moved to Austin, where they would reside until she was the age of 10. She would eventually move back to the Rio Grande Valley to her parents’ hometown of Mercedes, where she would graduate from Mercedes High School in 2003. After high school, Anciso received her BA in Studio Art from The University of Texas at Austin in 2008. Shortly thereafter, she would move to Oakland, California, where in 2011, she would earn an MFA from the California College of the Arts in San Francisco. Both a product and reflection of humble, hardworking, and resilient migrant farmworkers and laborers, Anciso is the first in her family to graduate from college and subsequently, graduate school.Anciso’s art has been included in exhibitions throughout the country and internationally. Her work has been exhibited at venues including the San Jose Museum of Art, the Oakland Museum of California, the Vincent Price Art Museum of Los Angeles, the Mexic-Arte Museum of Austin, the Alameda National Center for Latino Arts and Culture of San Antonio, the National Museum of Mexican Art and the Center for Book and Paper Arts in Chicago, Centro Cultural de la Raza of San Diego, Galeria de la Raza of San Francisco, the historic residence museum of the Sam and Alfreda Maloof Foundation for the Arts and Crafts, a Smithsonian Affiliate in Alta Loma, California (in conjunction with Los Angeles-based Craft in America), and Recyclart in Brussels, Belgium.In addition to practicing art, she has taught art to a diverse array of youth through non-profit organizations, ranging from the Oakland Leaf Foundation’s Urban Arts Program in the Fruitvale District of East Oakland to the Summer Institute for the Gifted at the University of California, Berkeley, as well as the Mission District Clubhouse of the Boys & Girls Clubs of San Francisco, where she served as Art Director. Both intermittently and full-time, she has taught Grades K-8 as a Substitute Teacher for several years, holding long-term positions as a K-1 Bilingual Teacher, Pre-K Special Education Teacher, 2nd Grade Teacher, as well as middle school Spanish Teacher in urban schools across the Bay Area. In fulfillment of her teaching credential requirements, Anciso finished her student teaching in elementary schools in East Oakland through the University of California, Berkeley Graduate School of Education’s Developmental Teacher Education program. She currently teaches full-time at an urban elementary school in the East Bay.Anciso has also facilitated various art workshops as a guest lecturer and speaker to undergraduates, as well as Master’s and Doctoral students through the University of San Francisco School of Education, the University of Illinois at Urbana-Champaign, and The George Washington University, among other venues and forums.Her contributions as an Artist have been acknowledged by The Huffington Post, who identified her as one of “13 Latina Artists Under 35 You Should Know,” as well as Latina Magazine, which has named her as an Innovator in their Latina 30 Under 30 list of Celebrities, Style Stars, Innovators, and Influencers. Recently, she was featured in ELLE Magazine’s 30th Anniversary Portfolio, titled, “This is 30.” The portfolio highlights 35 women who are recognized as “outstanding musicians, comedians, politicians, artists, activists, novelists, athletes, and actors” who turned 30 in 2015.She currently lives and works in Oakland and is a Berkeley Distinguished Graduate Fellow, recently earning her MA in Education at the University of California, Berkeley Graduate School of Education.Contact a speaker booking agent to check availability on Natalia Anciso and other top speakers and celebrities.