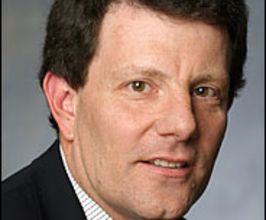 Book Nicholas Kristof for your event

A two-time Pulitzer Prize-winning columnist for The New York Times, Nicholas Kristof is an extraordinary thinker, human rights advocate, and chronicler of humanity. A seasoned journalist, he has traveled the major roads and minor byways of China, Africa, India, and South Asia, offering a compassionate glimpse into global health, poverty, and gender in the developing world. Kristof has lived on four continents, reported on six, and traveled to more than 150 countries, all 50 states, every Chinese province, and every main Japanese island. He’s also one of the few Americans to visit every member of the “Axis of Evil.” A bestselling author, in his most recent book, A Path Appears, Kristof and his wife Sheryl Wudunn look around the world at people who are working to make it a better place, and show readers the numerous of ways this work can be supported. During his travels, he has had unpleasant experiences with malaria, wars, an Indonesian mob carrying heads on pikes, and an African airplane crash.Kristof and his wife were the first married couple to win a Pulitzer in journalism for their coverage of China’s Tiananmen Square democracy movement. They wrote “China Wakes: The Struggle for the Soul of a Rising Power” together and co-authored the best-selling “Half the Sky: Turning Oppression into Opportunity for Women Worldwide.” Addressing worldwide maltreatment, marginalization, and brutality towards women, “Half the Sky” draws a compelling picture of the trials and triumphs of women struggling for opportunity and equality. Called “electrifying” by The Washington Post, the book inspired a special four-hour PBS series of the same name. Often called the “reporter’s reporter,” Kristof is also the subject of the 2009 Sundance Film Festival documentary “Reporter” (executive-produced by Ben Affleck).Haunted by the Darfur genocide, Kristof has gone beyond reporting. He gives a voice to the voiceless. In his presentations, Kristof shares his firsthand accounts of some of the world’s most devastating human tragedies. Kristof also brings his audiences around the world with intimate tales of human courage and sacrifice. Ultimately delivering a message of hope, Kristof empowers audiences to not only understand the world we live in, but transform the lives of others within it.Contact a speaker booking agent to check availability on Nicholas Kristof and other top speakers and celebrities.