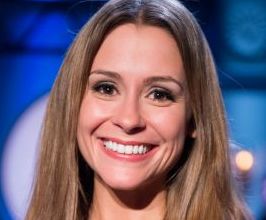 Personal Chef and “The Next Food Network Star” finalist

Book Nicole Gaffney for your event

Nicole Gaffney’s philosophy on cooking is to always keep it simple. She believes that using good quality, fresh ingredients is the key to making a memorable meal with little fuss. And that’s got something to do with where she comes from. Nicole was raised at the southern Jersey shore, a place where fresh seafood and produce are plentiful, and don’t need much work to make their flavors shine. She describes her cooking style as Coastal Cuisine: food that delivers big, bright flavors, made with fresh ingredients, prepared with simple techniques.Gaffney left the Jersey coast to attend college on the Gulf coast at Louisiana State University. She received a bachelors degree in Communications and returned to the Atlantic City area where she worked several jobs including those in sales, modeling, and managing an Italian market. It wasn’t long before Gaffney knew the food industry was where she belonged, so she enrolled at The Academy of the Culinary Arts in Mays Landing, NJ. In her first semester, Nicole achieved straight A’s and felt confident she had the skills needed to open her own personal chef business. So along with the guidance of the American Personal and Private Chef Association, she started The Dinner Belle Personal Chef Service in June of 2010.Not long after she started her career as a personal chef, Gaffney encountered several other opportunities combining her communications background with her love of food. In early 2012, she became the host of “Best of the Best” and “The Chef’s Kitchen,” two local Philadelphia shows about chefs and cooking. In late 2012, Nicole filmed a series of cooking videos for Santa Sweet and UglyRipe tomatoes, which was fitting considering her adoration of tomatoes.More than anything, Gaffney loves teaching and inspiring others to be fearless in the kitchen, and in life. She can often be found doing live cooking demonstrations at local festivals such as the Atlantic City Food & Wine Festival, Philadelphia Food & Wine Festival, Atlantic City Seafood Fest, and Atlantic City Beer Fest. In 2013, Gaffney started her blog Too Full For School to share recipes and personal anecdotes about food. Occasionally, she volunteers her time teaching kids how to cook healthy recipes at the Atlantic City Boy’s and Girl’s club.Nicole currently resides in Brigantine, NJ with her husband Chaser, a licensed architect and Atlantic City fire fighter. When they aren’t working, they spend time together gardening, paddle surfing, going to concerts and comedy shows, and eating and drinking with friends.Gaffney shared her passion for all things coastal on season 10 of “The Next Food Network Star” where she was a top three finalist.Contact a speaker booking agent to check availability on Nicole Gaffney and other top speakers and celebrities.