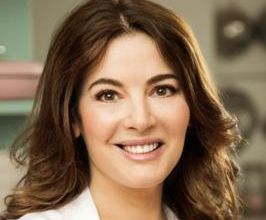 Celebrity Chef and Food Network Personality, Judge on “The Taste”

Book Nigella Lawson for your event

Nigella Lawson is the British bestselling author of “Nigella Express: Good Food Fast,” “Feast: Food to Celebrate Life,” “Forever Summer,” “Nigella Bites,” “How to Be a Domestic Goddess,” and “How to Eat,” which have sold in excess of 5 million copies worldwide. Her 2005 book “Feast: Food to Celebrate Life” inspired “Nigella Feasts,” which debuted on Food Network in fall 2006. Her second Food Network series, “Nigella Express,” launched in fall 2007 in conjunction with the release of her book, “Nigella Express.” American audiences also know Nigella as host of “Forever Summer with Nigella,” her popular cooking/lifestyle series that aired on Style, and “Nigella Bites,” which aired on E! Entertainment Television and style.In July 2003, Nigella launched Nigella Lawson’s Living Kitchen, a range of kitchen items designed in collaboration with Sebastian Conran, to widespread acclaim in the U.S.Nigella was Deputy Literary Editor of The Sunday Times before pursuing a successful freelance career. She has written for a variety of magazines and newspapers, including the Sunday Times, Evening Standard, Guardian, Daily Telegraph, Observer, Times Magazine, Gourmet and Bon Apptit magazines. She originated the restaurant column in The Spectator and wrote the food column for British Vogue for several years. Nigella also wrote a bi-monthly food column for The New York Times’ Dining In, Dining Out section.Hailed as Author of the Year by the 2001 British Book Awards, Nigella was also named Bon Apptit magazine’s 2002 Tastemaker of the Year. “How to Eat” was honored as the 1998 British Books Awards Illustrated Book of the Year, while How to Be a Domestic Goddess was named Cookery Book of the Year by the Guild of Food Writers in 2001. “Nigella Bites” received the WH Smith Book Awards 2002 Lifestyle Book of the Year, with the cooking series based on the book winning the Gold Ladle for Best Television Food Show from the World Food Media Awards in 2001.“The Taste,” which airs on ABC, features Lawson along with Anthony Bourdain, Ludo Lefebvre and Brian Malarkey coaching a team of four competing pro and amateur cooks chosen from a nationwide casting call as they vie to create the best tasting dish. As these things often go, challenges are issued, elimination rounds are endured, and blind taste tests take place.In February 2013, she released a new cookbook “Nigellissima: Easy Italian-Inspired Recipes,” a celebration of food that is fresh, delicious, and unpretentious. Here Nigella Lawson serves up 120 straightforward and mouthwatering recipes that are quick and easy yet elevate weeknight meals into no-fuss feasts.In 1992, Nigella married the journalist and broadcaster John Diamond. John was diagnosed with throat cancer in 1997 and died in 2001. They had two children together, Cosima and Bruno. Nigella remarried in 2003 and lives in London with husband, Charles Saatchi, and her children.Contact a speaker booking agent to check availability on Nigella Lawson and other top speakers and celebrities.