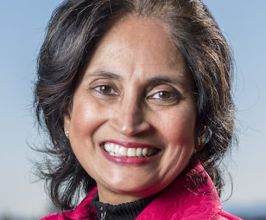 Book Padmasree Warrior for your event

Padmasree Warrior is the former CEO of NIO U.S. and the former CDO of NIO, an electric car company. Previously, she was Chief Technology Officer of Cisco. In this role, Warrior helped define Cisco’s technological strategy and drove innovation across the company, working closely with the senior executive team and Board of Directors. As an evangelist for whats possible, she pushed Cisco to stretch beyond its capabilities, not just in technology, but also in its strategic partnerships and new business models.In her role as the Senior Vice President of Engineering, Warrior co-lead Cisco’s Engineering organization alongside Senior Vice President, Engineering, Pankaj Patel. Together they set the vision and strategy for the organization, and they lead a team of over 24,000 engineers to execute on the groups strategic priorities. Warrior focuses on core switching, collaboration, data center/virtualization, and cloud technologies, as well as architectures for business transformation.Warriors energetic, approachable, and pragmatic leadership style integrates ideas from diverse sources that include engineers, sociologists, technologists, marketers, and policy experts. She has earned a reputation for establishing processes that tap a rich diversity of technical, business, and entrepreneurial knowledge to nurture disruptive and breakthrough innovations, then speed their development time to market.Warrior joined Cisco in 2007. Prior to that, she was the Chief Technology Officer at Motorola. Warrior also serves on a broad range of government and industry advisory boards, as well as those of charitable and community organizations.In 2001 she was one of six women nationwide selected to receive the “Women Elevating Science and Technology” award from Working Woman Magazine. In 2005, The Economic Times ranked Warrior as the 11th Most Influential Global Indian.In 2007 she was awarded an honorary doctorate of engineering from New York’s Polytechnic University. In 2007, she was inducted into the Women in Information Technology International Hall of Fame and several years later, she received the 2009 Annual Achievement Award by the Forum for Women Executives and EntrepreneursThe San Jose Mercury News listed her as one of the 2011 Valleys Most Powerful Women. Fast Company magazine listed her among the 100 Most Creative People in Business, and she was one of six women nationwide selected to receive the “Women Elevating Science and Technology” award from Working Woman magazine.Fortune Magazine called her one of four rising stars on its Most Powerful Women list, placing her between the 10 “highest paid” and the “Young and Powerful” categories. As of 2014, she is listed as the 71st most powerful woman in the world by Forbes. In 2018 she was also featured among “America’s Top 50 Women In Tech” by Forbes.She started her entrepreneurial venture, Fable, in September 2019 and is currently is Founder, President and CEO. The venture is aimed at improving cognitive fitness.Warrior holds a Bachelor of Science degree in chemical engineering from the Indian Institute of Technology in New Delhi and a master of science degree in chemical engineering from Cornell University.Contact a speaker booking agent to check availability on Padmasree Warrior and other top speakers and celebrities.