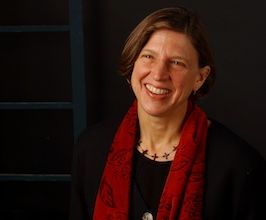 Scientist, Professor of Plant Pathology at the University of California – Davis; Expert in the Challenges of Farming

Book Pamela Ronald for your event

Pamela Ronald is Professor in the Department of Plant Pathology and the Genome Center at the University of California, Davis. She serves as Director of Grass Genetics at the Joint Bioenergy Institute. Her laboratory has genetically engineered rice for resistance to diseases and flooding, which are serious problems of rice crops in Asia and Africa.In 1995, the Ronald Laboratory isolated and characterized the XA21 pattern recognition receptor (Song et al. Science 1995: Lee et al., Science 2009). Subsequent discoveries in flies, humans, mice, and Arabidopsis revealed that animals and other plant species also carry membrane-anchored receptors with striking structural similarities to XA21 and that these receptors also play key roles recognition of microbial signatures and host defense.The Ronald laboratory, in collaboration with David Mackill, isolated the Submergence tolerance 1 (Sub1) QTL through a map-based cloning approach (Xu et al., 2006). This work revealed a complex locus of three genes carrying three genes that encode putative transcriptional regulators of the AP2 class. Through transgenic analysis the Ronald laboratory demonstrated that the overexpression of Sub1a is sufficient to confer submergence tolerance to intolerant varieties. Mackill’s group at the International Rice Research Institute introduced the Sub1QTL into agronomically important varieties using a marker assisted backcross selection strategy. In 2011, over 1 million farmers planted Sub1 rice. Cultivation of the new variety is expected to increase food security for 70 million of the world’s poorest people.The Ronald laboratory has also collaborated with Julia Bailey Serres to elucidate the complex molecular networks involved in regulation of submergence tolerance (Fukao et al., 2006). As part of this goal, the Ronald laboratory completed a transcriptomics analysis to identify genes and pathways regulated by the Sub1 QTL (Jung et al., 2010) and generated a rice stress response interactome (Seo et al., 2011) Ronald’s research has been published in Science, Nature and other leading peer-reviewed scientific journals and has also been featured in The New York Times, Organic Gardening Magazine, Popular Mechanics, CNN , The Scientist, Popular Science, and on National Public Radio.Ronald received a B.A. from Reed College, an M.A. from Stanford University, an M.S. from the University of Uppsala in Sweden and her Ph.D. from UC Berkeley in 1985. She was a postdoctoral fellow at Cornell University from 1990-1992. In 1992, Ronald joined UC Davis as a faculty member where she served as Faculty Assistant to the Provost from 2004-2007. From 2003-2007 Ronald chaired the U.C. Davis Distinguished Women in Science seminar series, an event designed to support women’s professional advancement in the sciences. In 1996, Ronald founded the Genetic Resources Recognition Fund, a UC Davis program to share benefits of biotechnology with less developed countries.Ronald is an elected Fellow of the American Association for the Advancement of Science. She was awarded Fulbright (1984), Guggenheim (2000), Japan Society for the Promotion of Science (2008) and Fulbright-Tocqueville Distinguished Chair (2012) Fellowships.. She and her colleagues were recipients of the USDA 2008 National Research Initiative Discovery Award for their work on submergence tolerant rice. In 2009, they were finalists for the 2009 World Technology Award for Environment. In 2009, Ronald received the National Association of Science Writers Science in Society Journalism Award and was nominated for the Biotech Humanitarian Award. In 2011, Ronald was selected to be the Charles Valentine Riley lecturer, an annual event cosponsored by the American Association for the Advancement of Science and the World Food Prize Foundation. In 2011, Ronald was selected as one of the 100 most creative people in business by Fast Company Magazine.Ronald has written opinion pieces for the Boston Globe, The Economist, and the New York Times. Ronald is a blogger for ScienceBlogs, which has recently partnered with National Geographic. Their goal is to enhance public understanding of and engagement with science. She is coauthor with her husband, Raoul Adamchak, an organic farmer, of Tomorrow’s Table: Organic Farming, Genetic and the Future of Food that was selected as one of the best books of 2008 by Seed Magazine and the Library Journal. Bill Gates calls the book important for anyone that wants to learn about the science of seeds and challenges faced by farmers.Contact a speaker booking agent to check availability on Pamela Ronald and other top speakers and celebrities.