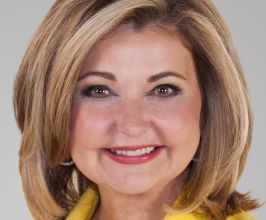 Book Pat Ciarrocchi for your event

In more than 33 years as an anchor at CBS 3, Pat Ciarrocchi has excelled in a variety of assignments at the television station from anchoring the early morning, noon and 5 p.m. newscasts to hosting Evening Magazine and Talk Philly, the station’s popular lifestyle programs. She also served as the station’s medical reporter for five years Ciarrocchi joined Channel 3 in 1982. In her early years at the station, she set the pace for morning news in Philadelphia as the station’s early morning news anchor, growing that program from a half-hour newscast to a two-hour staple in the market. But some of her most memorable work involved six overseas assignments at the Vatican. Ciarrocchi reported live at the canonization of St. Katherine Drexel in 2000, at the funeral of Pope John Paul II in 2005, at the historic resignation of Pope Benedict XIV in 2013, and on the Philadelphia delegation 2014 visit to Rome to invite Pope Francis to the World Meeting of Families. Ciarrocchi capped off her career coverage of the Catholic Church with more than 16 hours of live coverage during Pope Francis’ historic visit to Philadelphia in September, 2015 for the international event. Along the way, Ciarrocchi has earned virtually every major honor in broadcasting including being the first woman inducted into the Pennsylvania Association of Broadcasters Hall of Fame in 2014. In 2000, she was inducted into the Philadelphia Broadcast Pioneers Hall of Fame. In 2015 she received the Silver Circle Award, recognizing individuals who have outstanding service in broadcasting for a minimum of 25 years, from the Mid-Atlantic chapter of the National Academy of Television Arts and Sciences. She’s also been honored with the nationally prestigious Gabriel Award from Catholic Academy of Communications Arts, a CEBA Award recognizing communications excellence to Black audiences and a Sarah Award from Women in Communications locally. Her work has also earned her multiple Philadelphia Emmy Awards.Also, in recognition of her work in the Italian-American community, Ciarrocchi was awarded the Knight of the Order of Merit of the Italian Republic – the Cavaliere Ufficiale Ordine al Merito della Repubblica Italiana. Before returning home to Philadelphia, Ciarrocchi was anchor/reporter/producer for WHAG-TV in Hagerstown, Maryland for three years. She began her career in broadcasting in 1974 at WAMS Radio in Wilmington, but became captivated by reporting the news while on staff at WDEL Radio, Delaware’s top-rated radio station. Ciarrocchi has used the celebrity of her broadcasting career to better the lives of others, committing her personal time to community activism and fundraising on issues affecting women and children. Since 1991, she has reported on and covered live the Susan G. Komen Philadelphia Race for the Cure, telling the stories of women and their families coping with breast cancer. Ciarrocchi has served on the boards of the Easter Seal Society of Southeastern Pennsylvania and Susan G. Komen. She has also personally raised hundreds of thousands of dollars for local charities through The Pat Ciarrocchi Golf Classic and Pat’s Passion for Fashion Show and Auction, two local events she founded. Ciarrocchi has been awarded honorary doctorate degrees for her professional and community accomplishments from La Salle University in Philadelphia, Neumann University in Aston, Cabrini College in Radnor and her alma mater, Rosemont College. Ciarrocchi earned a Bachelor of Arts degree in American Studies from Rosemont in 1974. In 2006, she was presented with the college’s highest honor, the Cresset Award. A native of Chester County, she currently resides in Merion, Pennsylvania with her husband, David Fineman. She has two grown stepsons and, in her free time, she and her husband enjoy opera, travel and golf.Contact a speaker booking agent to check availability on Pat Ciarrocchi and other top speakers and celebrities.