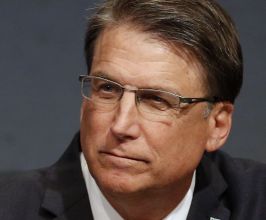 Book Pat McCrory for your event

Pat McCrory was raised in Guilford County and attended Catawba College in Rowan County, where he earned degrees in Education and Political Science. Inspired by the desire to make a difference in the city of Charlotte, McCrory threw his hat into the political arena and decided to run for an at large city council seat, and won. He won two more times, serving as Mayor Pro Tem in the process.McCrory was elected Mayor of Charlotte in 1995 and went on to serve a record seven terms. When McCrory was elected as Mayor, Charlotte was on the cusp of an explosion of growth, and he was just the visionary needed to help take Charlotte to the next level to become one of America’s great cities. Mayor McCrory tackled and showed great leadership on Charlotte’s major issues like economic development, infrastructure, transportation, public safety, and education.Tens of thousands of jobs were created while McCrory served as Mayor as he was the consummate champion for economic development and job creation. Mayor McCrory more than rose to the occasion and under his leadership Charlotte became an economic hub in transportation, banking, manufacturing, energy, and tourism. McCrory successfully reduced the property tax rate as well as the city’s crime rate.McCrory is a nationally recognized leader in economic, transportation, and homeland security issues. He served as the Chair of the Republican Mayors Association and received a presidential appointment to the Homeland Security Advisory Committee. McCrory founded the Mayor’s Mentoring Alliance in 1995 and has personally served as a mentor to youths. In 2005, Charlotte was named in the 100 Best Communities for Youth by America’s Promise. McCrory was also the only elected official to serve on the national board of the Afterschool Alliance and was a featured Mayor in Harvard University’s Faith-based Executive Session.McCrory has been involved in many local charity boards, and served as the honorary chair for the Charlotte chapter of the Alzheimer Foundation and the Arthritis Foundation. McCrory has testified before Congress and has been an expert guest on several national media broadcasts, including National Public Radio, ABC World News, Lehrer News Hour, CBS This Morning, MSNBC News, CNN, CNBC and Fox News, among others. McCrory works for the firm Moore & Van Allen on energy issues, economic development, and strategic initiatives and serves on the corporate boards of Lending Tree and Kewaunee Scientific Corporation.McCrory, is joined by WBT’s Morning News host Bo Thompson every weekday morning from 8am to 10am as a to talk political, local, state and national issues on “The Pat McCrory Show.”Contact a speaker booking agent to check availability on Pat McCrory and other top speakers and celebrities.